GRUELING GLORY – The March on Carentan

[Cross-posted on this Remembrance Day on The Girl Who Wore Freedom, a documentary coming in 2019. See end of post to learn how you can be a part of it.]

It’s the sound of their boots I heard first, as I stood among pastures on the outskirts of Carentan. Not the ordered, rhythmic thumps of troops marching in formation, but the shuffle of soles over dirt and stone, and unintelligible words spoken by hushed voices. There were probably two hundred men in this group, dressed in period military garb, faces painted with clay and fatigue, bodies wearied by the hours they’d already spent walking under a beating Normandy sun.

They’d started their trek several hours before, following the trail of the heroic GIs who’d survived the fire of German guns on beaches and in the sky, then spent days trudging across treacherous marshlands, cutting their way through hedgerows, trying to see the enemy before it saw them.
When the modern reenactors reached a boggy place called La Barquette, they took a few moments to stand still and regain their strength, speaking little, their faces guarded, their expressions intense—as if their tiring trek in vintage boots, uniforms and gear had plunged them back into the battles that had scarred this land. 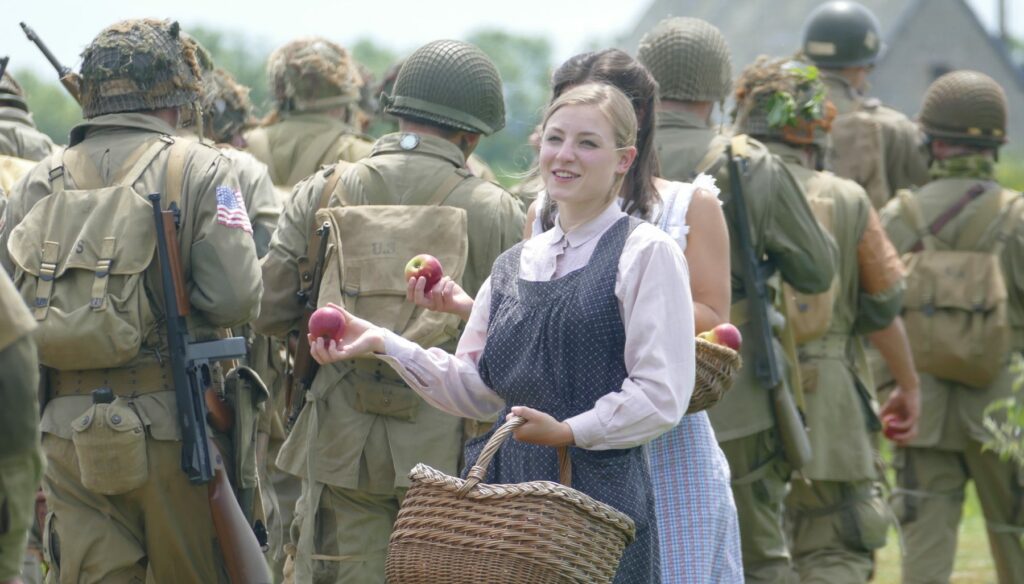 I saw their posture change when the siren of an incoming jeep reached their ears. They straightened, looked toward the sound, and something fierce seemed to come over their faces.
Fierce honor. Fierce purpose. Fierce love.
Staff Sergeant Rice, of the 101st Airborne, stepped down from the jeep, well into his nineties, and was ushered toward the path where the civilians-dressed-as-soldiers had morphed their ragtag ranks into two straight rows of strong-spined warriors—and Honor Guard for the veteran who had walked and fought on this patch of sacred ground. Their silence was powerful and moving. 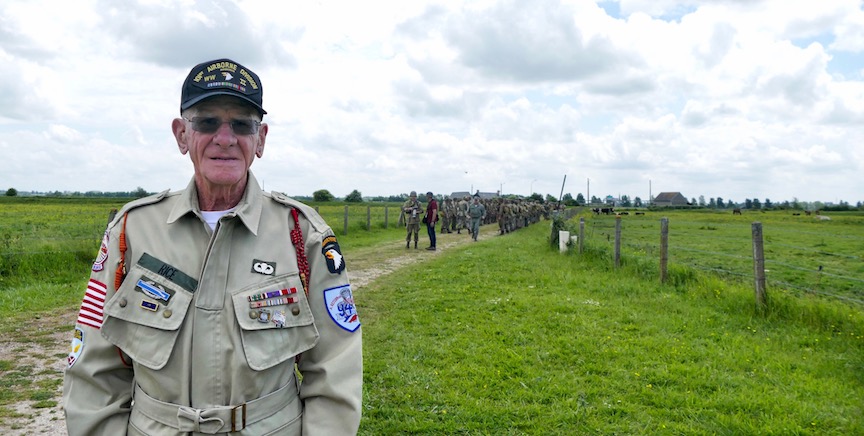 Staff Sergeant Rice’s gait was unsure at times, but his eyes… There was pride in his countenance, the kind of satisfaction that comes from knowing the enormity of what was accomplished, through sacrifice and valor, for the sake of the many nations represented among the men who had lined up to honor him.
The veteran walked slowly, shaking each hand, receiving the words of men who had come from across France and Europe to immerse themselves in the grueling glory of history revived. Then the soldiers huddled close to hear the details of his story, the tale of a young man—a child, really—who lost his way on a dark night in the fields of Normandy and somehow still helped to pave the path to Freedom.
As one of the famed “Screaming Eagles,” Tom Rice parachuted into Normandy on June 6, 1944. His pilot flew too fast and too low to avoid the anti-aircraft fire pummeling his plane, making the mission that much more dangerous. Some flak hit the C-47 just as Tom was about to jump, jolting everyone onboard. He found himself hanging outside the plane, held back only by an arm straddling the door frame, his body banging against the fuselage.

When Staff Sergeant Rice finally forced himself free, he landed far from his designated drop zone, several kilometers behind enemy lines. Those first days in Normandy were an intense lesson in guerrilla warfare for Tom and his comrades in arms as they learned by necessity how to fight in marshes and hedgerows against invisible foes.
Rice and his men were directly involved in the battle of La Barquette, where strategic locks, if destroyed or opened by the Germans, could have flooded the roads the Allies needed to reach Carentan. In order to secure the area quickly, the men were told to leave everything but their knapsacks behind. Tom remembers the innumerable rounds of enemy fire they took in the following hours, but he also vividly recalls that all he could think of as the battle raged was the pint of maple syrup he’d carried with him from home, now abandoned by the roadside with the rest of his belongings.
This hero’s WWII journey would end months later in Berchtesgaden, Austria, with the taking of Hitler’s Eagle’s nest.

The gathered men gathered at La Barquette clapped for Rice when the retelling of his story was over. He clapped too. But the faraway look in his eyes told me that it was his fellow soldiers he was remembering. The young, the old, the strong, the frail, the courageous, the fearful. The heroes who fought and fell at his side.
Hours later, I was in Carentan when these same reenactors marched into town, now nearly four-hundred strong. They were preceded by others in period costumes—women, children and the elderly—reenacting the exodus of the city’s population, lives piled high on rickety carts to escape the kind of horror we can scarce imagine nearly 75 years later.
The soldiers who followed were in formation now. They entered Carentan chanting, pride on their faces and power in their steps. They looked straight ahead as crowds saluted them, invigorated by the welcome of a grateful town freed from oppression by the courage of men who looked just like them. 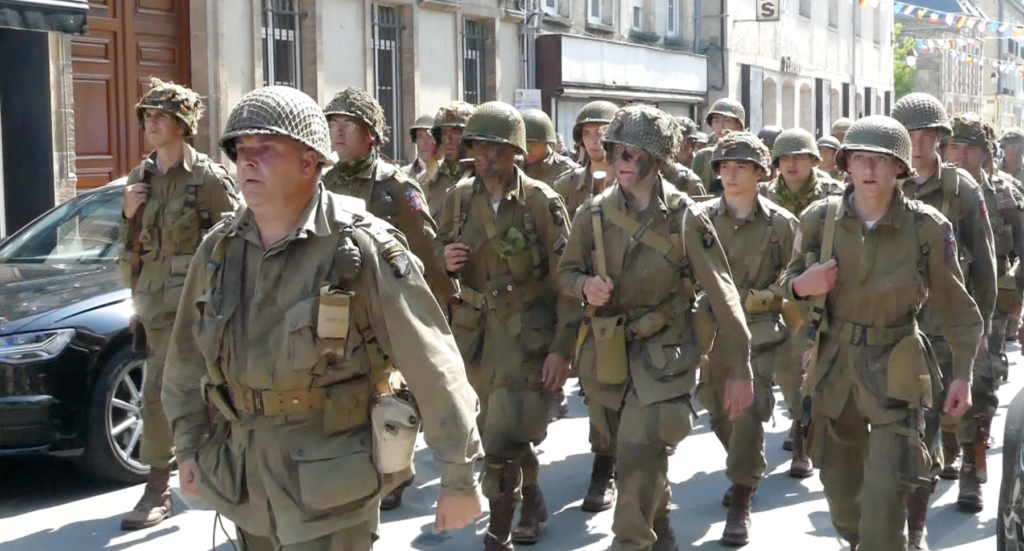 This was not the only celebration I witnessed as we filmed for The Girl Who Wore Freedom, but this day embodied Normandy’s heart in a powerful way. There is something visceral about its love for its liberators. It’s more than the American flags in every storefront, the banners strung across streets and the 1940s music blaring from loudspeakers in town squares. It’s the warm welcome of its population—an intentional, loving, celebrating force that captures the spirit and the gratitude of the Liberation. It’s the kindness of its citizens and their painstaking focus on embracing, honoring and thanking their American veterans well.
The Norman people understand the high cost of freedom. They are French today in part because of the sacrifice of American women and men. And they still live, as they have since June 6, 1944, by their oft-repeated motto, “N’oubliez jamais”—never forget. It’s a cross-generational commitment that recognizes the valor of veterans like Staff Sergeant Tom Rice and layers light and hope over the hallowed soil of a blood-stained land. 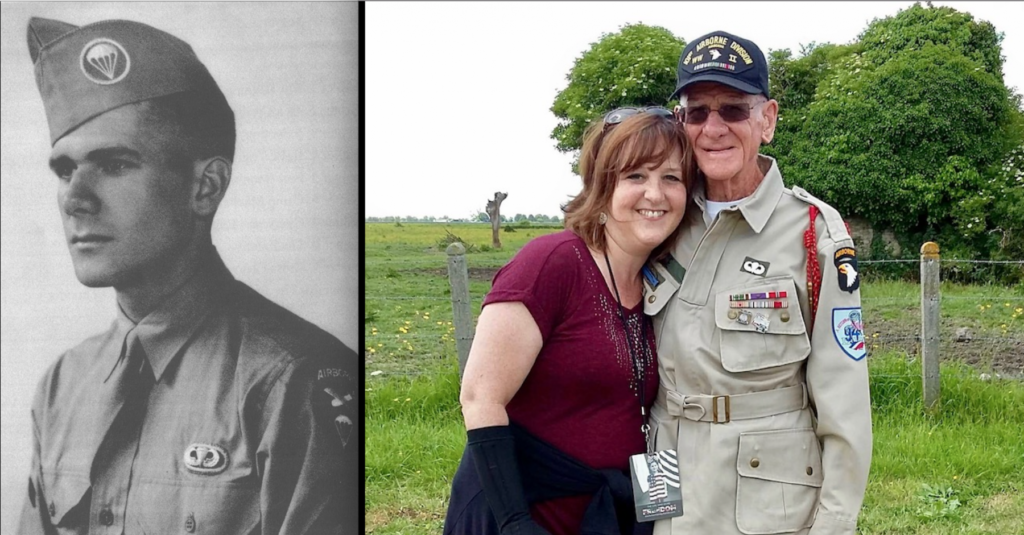 Meeting men like Tom Rice during the filming of The Girl Who Wore Freedom was one of the highlights of my life. Their stories need to be documented and remembered if this crucial era of our history is to continue to shed a light on the present and the future. But…we need your help to get this documentary across the finish line! Please consider even a small donation, which can be made online by clicking this link.