I stink at idioms. Most MKs do. And when I inadvertently rewrite them, I tend toward rhymes. “To beat a dead horse” becomes “to flog a dead dog,” and “to blow one’s own horn” becomes “to toot one’s own flute.” Until a few years ago, I tried to mask my idiom-idiocy with semi-sayings along the lines of “Hitting the nail on the…something” and “No good deed goes…yadda yadda.”

But there’s nothing like trauma to imprint the correct version of an idiom and a shell-shocked mind. Or a dozen German police officers with guns in their hands. Or a tile floor covered in shards of glass. Of all the MK stories I’ve told and retold over the past decade, this one stands alone for its chaos, drama and, well, stupidity. Because of it, I know without a doubt that good deeds don’t end in “yadda yadda.” They end in the punishment of chaos, humiliation…and my name in the local paper.
Mark wasn’t an overly irrational guy. Mischievous? Yes. Sometimes misguided? Of course. He was a senior in high school, after all, so any élans of budding wisdom were most often overwhelmed with sudden surges of testosterone, adrenaline and youthful recklessness. But I didn’t take that into account when he came up to me between classes one day and asked if he could use my apartment to stage an elaborate scenario to ask a girl to the spring banquet. I figured it would be a harmless and entertaining way to pass a Friday evening. Harmless? No. Entertaining? Only in retrospect.
Mark asked me to invite five girls to my apartment for a movie. He and his two friends planned to climb in through my bedroom window, surprise the young ladies mid-video, and invite Lydia to join him at the banquet. It all sounded sweet, in a blumbling-high-school-boy kind of way, and I had set up my part of the event in no time.
Only Lydia was in the dark. The rest of her friends had been informed of the unfolding plan, and we waited expectantly, as we began watching the movie, for Mark and Co. to make their grand entrance. It didn’t take long. I heard a scuffle coming from the back of the house. The wooden chair I’d left outside my window for easier entrance into my bedroom grated over the cement walk. I made eye-contact with Jenny and we shared conspiratorial smiles. This was going to be memorable. 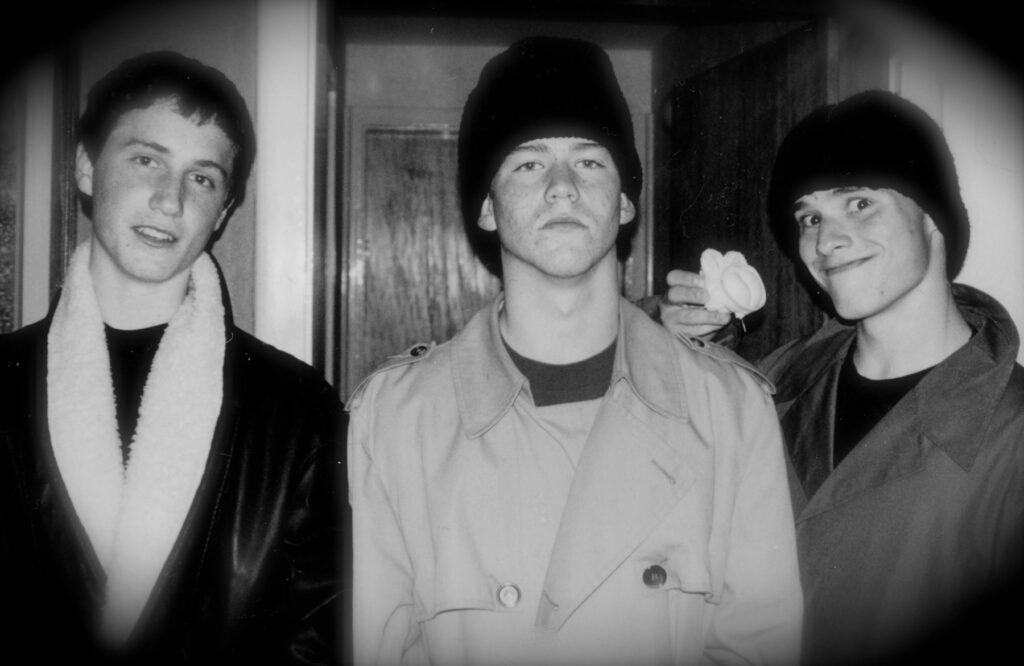 …we had no idea how memorable it would become. You see, the simple climb-in-through-the-window-and-surprise-the-girls plan that had been a mere embryo in the recesses of Mark’s mind a few days before had grown into an ill-conceived behemoth of a plan in the hours preceding his raid on my apartment.

While the girls and I had been making tea and choosing a romantic comedy to ooh and ah over, the guys had been plotting a much more nefarious outing. Unbeknownst to me, they’d ridden their bikes to my place in full terrorist gear. They’d worn black from head to toe and had strapped every weapon they’d collected in their worldwide travels to their scrawny teenage bodies: swords, machetes, sabers. After parking their bikes on the street outside my apartment, they’d completed their rather alarming look by pulling ski masks over their faces—in full view of the neighbors watering flowers and walking their dogs.

Oh, but Mark’s delusions of Rambo’esque proportions didn’t end there. You see, while Torrey, Jennie and I exchanged expectant glances and waited for the denouement of this harmless home-invasion, the boys let their pea-brains be overcome by treacherous hormones that quickly morphed their plans from “harmless” into “reprehensible.”

My first inkling that all would not be well was the screaming. Perhaps in an attempt to imbue the moment with an international flare, the boys started bellowing threats and commands in Spanish, Czech and Italian before bursting into my living room, ski masks virtually smoking with pent-up testosterone. The girls who were expecting the intrusion began to shriek as if they were genuinely being attacked. I’m guessing the waving machetes, black trench coats and foreign-language assaults might have played a role in the demise of their sanity.

Ah, but Mark wasn’t finished yet… In an effort to be authentic, he’d thought to pack a dozen or so glass jars in the backpack he carried  He headed straight to the kitchen and, to create the perfect sound-track to the raid on my shredded composure, began pulling jars out of his bag and throwing them onto the tile floor, punctuating the female shrieking and male roaring with the not-so-pleasant crashes of shattering glass.
When Stephen ripped the power cord of my stereo out of the wall in a rather convincing act of make-believe thievery, I finally found my voice. “STOP—IT—THIS—MINUTE!” I might have said something about morons and death threats too, but to be honest, all I remember is ordering my fingers not to wrap themselves around Mark’s scrawny little neck. I turned my attention to the girls who were still shrieking as if their limbs were being torn off and silenced them with a well-practiced teacher’s glare.

And there—still sitting on the couch and perfectly unfazed by the pseudo-attack of a black-clad militia—was Lydia. The only person genuinely surprised by the ninety seconds of chaos that had transformed my ratty little apartment into a DESTROYED ratty little apartment looked on in unruffled, bland curiosity. I wanted to order her to blanch a little. Maybe fake a bit of concern. At the very least show a modicum of awareness that her life had just been mock-threatened by irrational, weapon-toting blockheads.

She said yes when Mark asked her to go with him to the banquet. Go figure.
Mark was the cowering recipient of a few choice words in the minutes that followed the sudden end of the “festivities.” Then I pulled out the cake I’d made for the occasion and, wearing rubber boots to spare my feet from getting cut on the blanket of glass shards covering my kitchen floor, returned to the living room to serve the masked invaders and their hysterical maidens.
It’s while we were sitting there eating our trauma away that I saw the first police officer skirting the wall of windows that extended the length of my apartment. I choked a little on a piece of chocolate cake. One of the girls looked toward my entryway and froze, fork midway to her mouth. Then another girl froze. When I saw the blood draining from Mark’s face, I took a deep breath and turned toward the source of his discomfort. There, framed in the living room doorway, stood yet another police officer—bullet proof vest, laser-sharp eyes and unholstered gun. 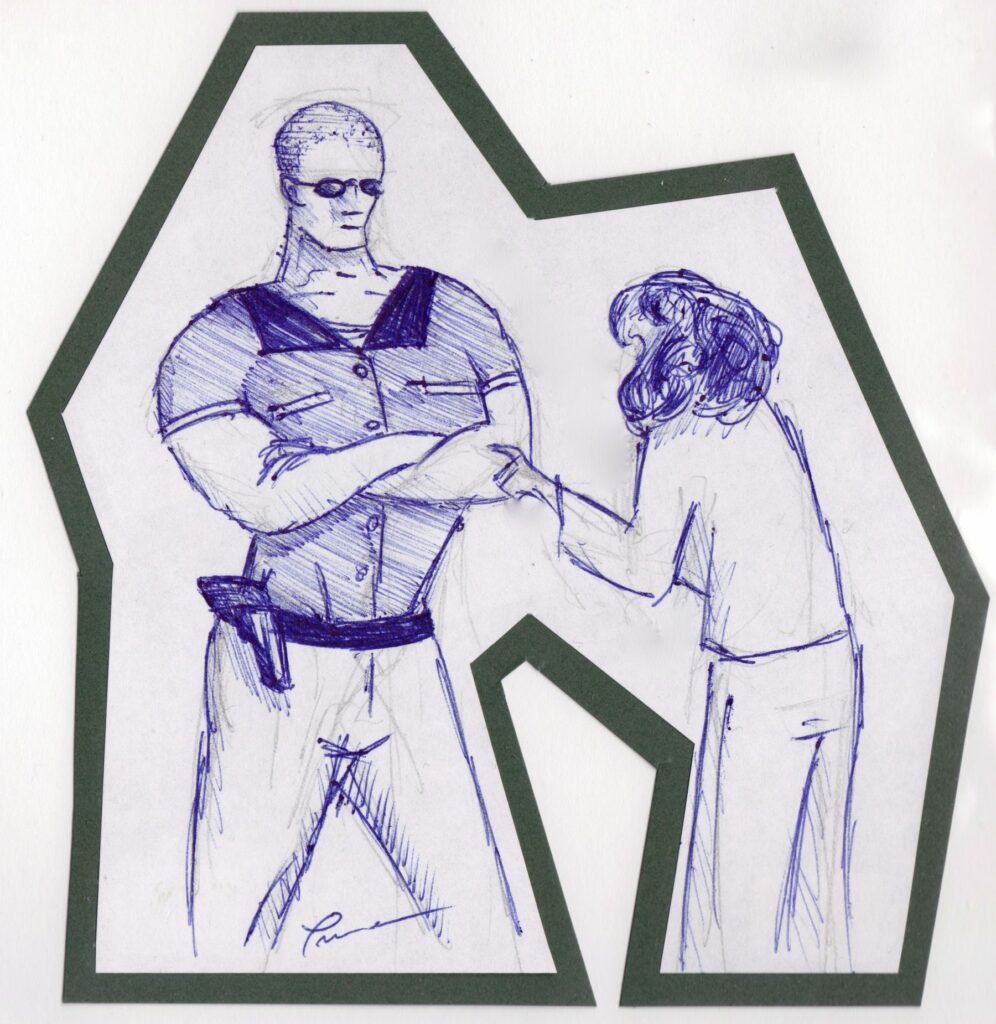 (Drawing by Stephen…one of the hoodlums)

It turns out, the neighbors had seen the boys in full combat gear descending the stairs to my home. They’d heard the screaming and the glass shattering. When silence had suddenly descended, they’d likely feared the worst and called the police. And ten of Germany’s finest had rushed to Riedlingen, turned off their sirens before entering the village, then stealthily circled my apartment and entered through the open front door.
I’m not fluent in German, but when Herr Policeman barked a question at me, I had a pretty good idea of what he was asking. I pointed at Mark and attempted to formulate an explanation that would make sense to a pragmatic, no-nonsense mind. I came up with nothing. So in a rather humiliated and helpless tone of voice, with broken German and supporting hand gestures, I tried to explain that “that guy there” wanted to invite “that girl there” to a banquet, and he thought “this” (I motioned to the chaos) would be a creative way of doing so. The cop turned toward the kitchen, pointed at the floor, and barked “Und das?” That? Well, …
About a month later, I was stopped by police for a random check of my car’s papers. The gentleman saw the name on my driver’s license and turned to show it to his pals. I was glad I couldn’t understand the exchange that ended in guffaws and head-shaking. I figured it wasn’t anything that would bolster my self-esteem. Or crown me queen of international relations.
No good deed goes unpunished? Lesson learned…in spades!
*Anyone who has ever known “Miss Phi” is aware that “moron” is actually a term of endearment.  Just wanted to make that clear!
Don’t forget to “Like” and “Share”!