Wednesday, 12:30 pm.  What the French would call a “long moment of solitude.”  I stood at the front of a classroom at Moody Bible Institute and smiled at the sole occupant of its 50-some seats. 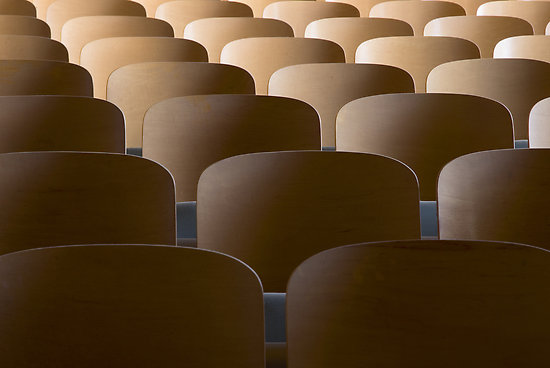 “You know what this session is about, right?” I asked, convinced that his solitary presence was the result of some misunderstanding.

“Yeah, it’s about finding our identity in Christ or something,” he answered.

“Actually, that’s not quite it.”

“About how the gospel affects our identity in the world?

I gave him my best I’m-so-sorry-for-both-of-us look and said, “Actually, it’s about MKs.  Missionaries’ Kids.”

“You probably want to go join another sessions, right?”

He ducked his head.  “Yeah, that might be best.”

And off he went into the maze of hallways and elevators that had witnessed my intrepid and expectant arrival mere minutes before. 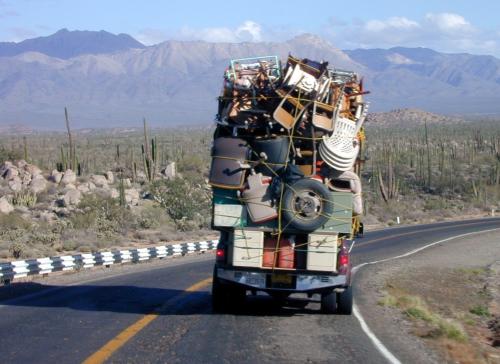 The day before, I’d gone into epic packing mode.  The trip from Wheaton to Moody takes all of 45 minutes in good traffic, yet you’d think I was packing for nuclear winter. Two fans, a borrowed cooler stocked with Chai mix, milk, granola bars and fruit drinks, a laptop, an external hard-drive, a camera, a pillow, medication for every imaginable ailment, a People magazine for brainless interludes…  The more nervous I get, the more I over-prepare, and the state of my car’s trunk was a testament to the burden of responsibility I’d felt since being asked to speak at Moody’s Missionary Conference last summer. 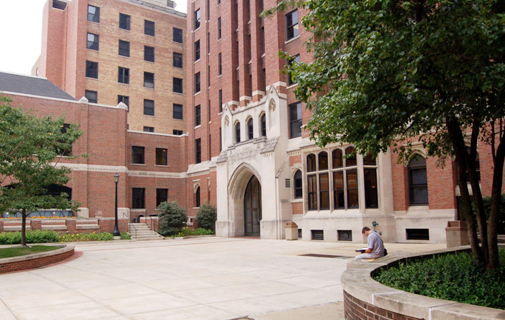 I was eager, I was confident in my materials, and I was determined to give it my best shot…
Right up until no one showed up for the first of my four sessions.

It was a little jarring.  All my meticulous forethought hadn’t allowed for this scenario.  But a vague session title (“The Identity Puzzle”) coupled with the students’ focus on sessions having to do with mission organizations they might join in the future had had what you might understate as an “adverse effect” on attendance at this seminar.
I wasn’t defeated or hurt.  Just pensive as I made the long trek from the classroom to the Commons, where I pondered the situation over an extra-large burrito.  My mom, who had come from Canada to be my sidekick for the conference, sat across from me as I briefly doubted the viability of my calling to expose the MK’s plight to a world that largely doesn’t seem to care.  If my 12:30 session was anything to go by, I had reason to be concerned.

1:25.  Back to Sweeting’s Room 235.  Back to the Smart-Desk I loved so much I wanted to carry it home with me and the rows of empty seats.  Back to the wondering.  One person walked in.
“This is the session on ‘The Lies MKs Believe,’ right?”
I didn’t want to scare the sweet young lady by hugging her, so I opted for a casual, “Yep, it is!”
A few more wandered in.  Then more.
By the time the clock read 1:30, my heart was buzzing with gratitude.  I picked up my new remote control, pointed it at my laptop, and pulled up the first screen:  “Lie #1 – I’ll Never Belong.” 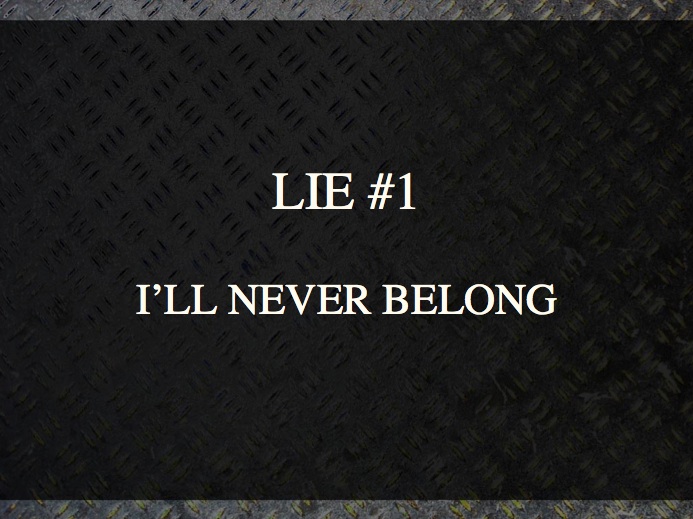 The next three sessions were well attended, the discussions were profound and inspiring, and the response from the staff and students in attendance (MK and non-MK) was everything I had hoped it would be.

Had I doubted my calling during the first sessions’ non-attendance?  No—not my calling.  But I’d be lying if I said I hadn’t wondered if it’s really reasonable to expect people to show interest in this topic.  I am so grateful—so grateful—that the Lord quickly countered my concern. 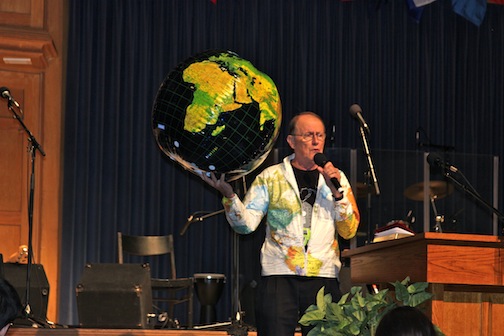 From my two days at Moody, I take away the thrill of multi-lingual worship, of sermons by the likes of George Verwer and Neil Cole, of watching my former BFA classmate (Clive Craigen) direct the massive conference, and of witnessing hordes of young Christians eagerly pursuing a future in ministry.
But it’s the conversations—the indelible conversations—that I carry closest to my heart: 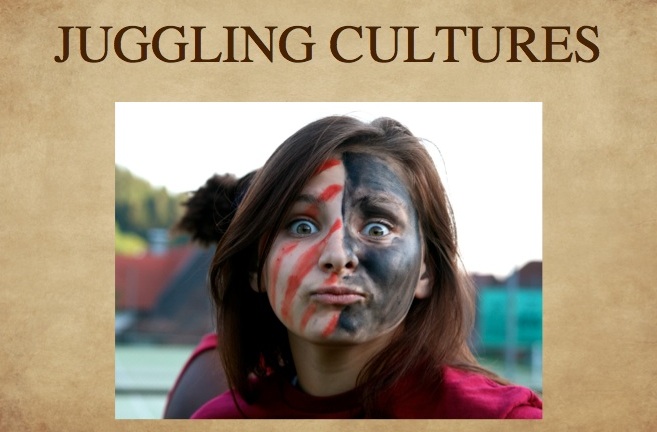 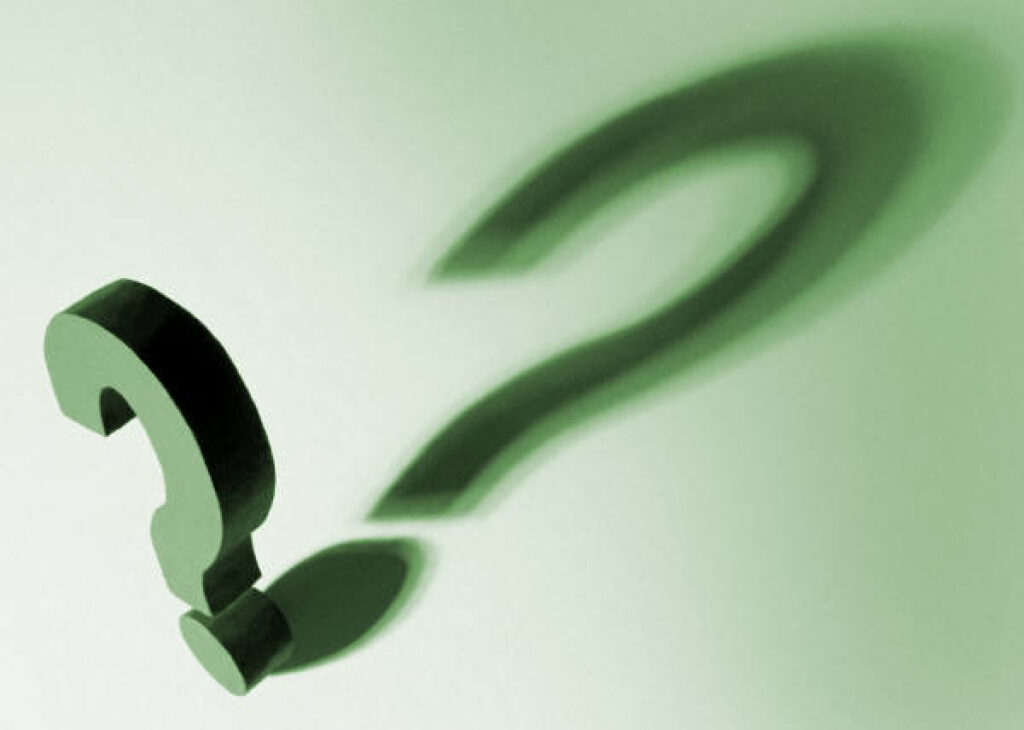 I’m grateful for the unattended session.  It caused me to question.
And I’m grateful for the following three sessions that answered my questions, revived my passion and confirmed my direction.  There is no expiration date to the needs of MKs.  If they are not met in their early years, they’ll still remain decades later, coloring perspective, dictating identity and motivating decisions.  The tears I witnessed in every session I led were more than an emotional response to the stories I told and the guidance I tried to impart.  They were evidence of the core-deep yearning and unbelonging that is often a part of the MK experience.  Few  say it better than Johan Bojer this quote:

“If you came back, you wanted to leave again.  If you went away, you longed to come back.  Wherever you were, you could hear the call of the herdsman’s horn far away in the hills.  You had one home out there and one over here and yet you were an alien in both places.  Your true abiding place was the vision of something very far off, and your soul, like the waves, always restless and forever in motion.”  Johan Bojer from “The Immigrants” 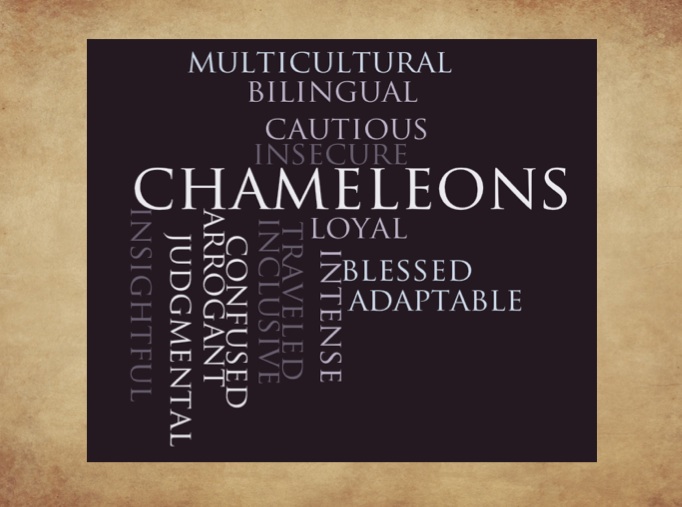 If I can play even a small role in shedding light on MK-specific needs, in inspiring mono-culturals to see beneath the stereotypes and churches to care in a more intentional and intelligent way, my time, efforts, investment and purposes are not—are NOT—in vain.
Thank you for praying.  The Moody experience was such a well-timed renewal for me.  I wish I could tell you of every encounter I had…they were profound, sobering and ultimately inspiring.  Moving forward with this ministry has never felt more necessary or more galvanizing.  (To be a part of it, please contact me through any of the “contact” links on this site!)
And now?  I’m forging ahead to the MK Summit in two weeks.  As full as my heart is today, I can’t imagine what it will feel like then!  I am blessed, so blessed, that my life and the partnership of like-minded Christians have equipped me for this.  Upward and onward!

In other news…this was also a time of reminiscing for my mom, who graduated from Moody back in 1960!  If you know her or knew my dad, you may be interested in these photos: 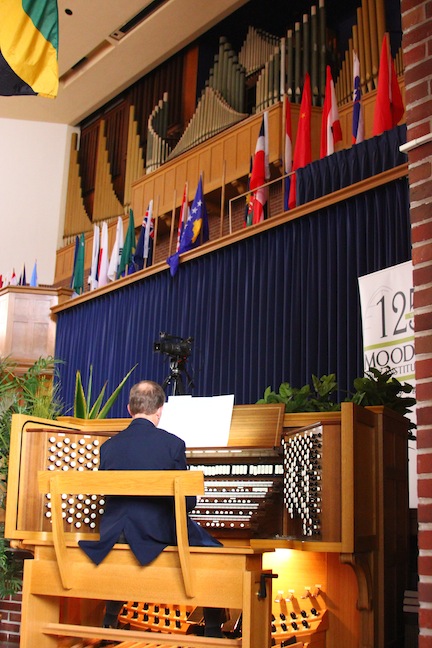 Our first stop was the auditorium, where this gentleman was practicing organ pieces. We both teared up at the grandness of the sound. 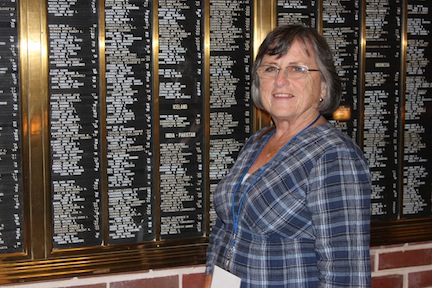 Standing by the wall of names of those Moody alumni who served in missions. 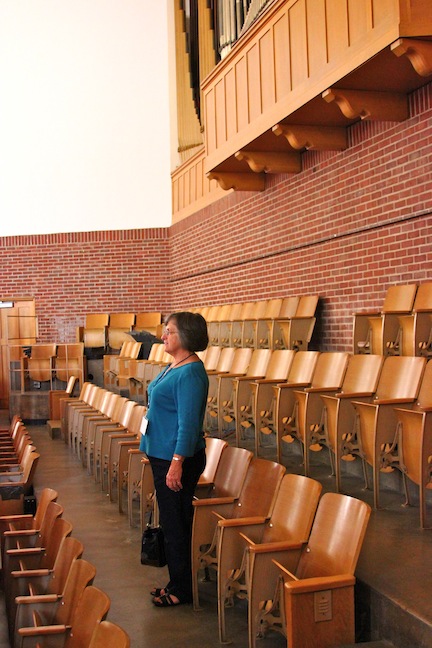 Where she stood so many times as part of the Moody choirs. 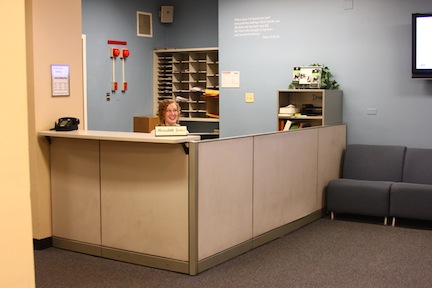 The Music Department desk where my dad “worked” as a student.  Rumor has it, he did more flirting than working! 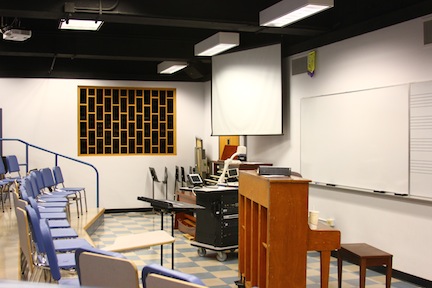 The rehearsal room both my parents knew well. 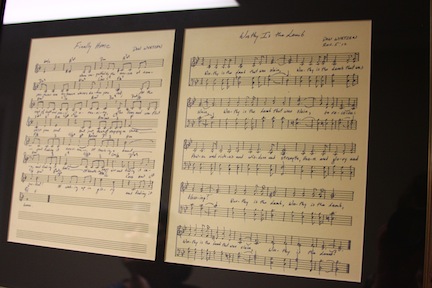 Manuscript music of two songs my own choirs have done: “Finally Home” and “Worthy is the Lamb.” 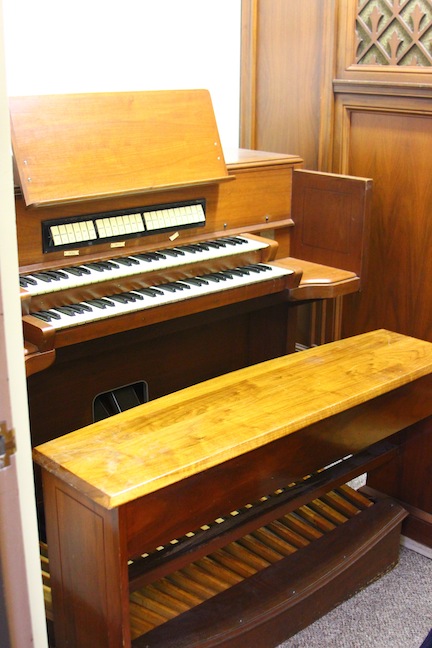 The organ room where both my parents learned the instrument.  The only time my dad’s grade was ever better than my mom’s! 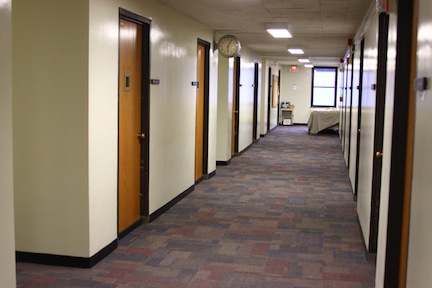 The hallway lined with practice rooms. 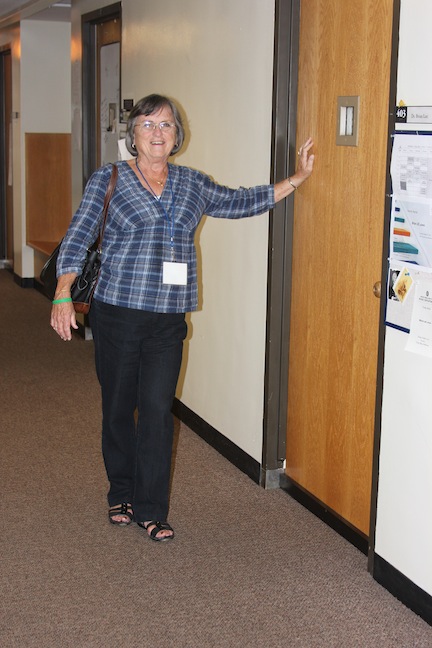 The office of her favorite voice teacher. 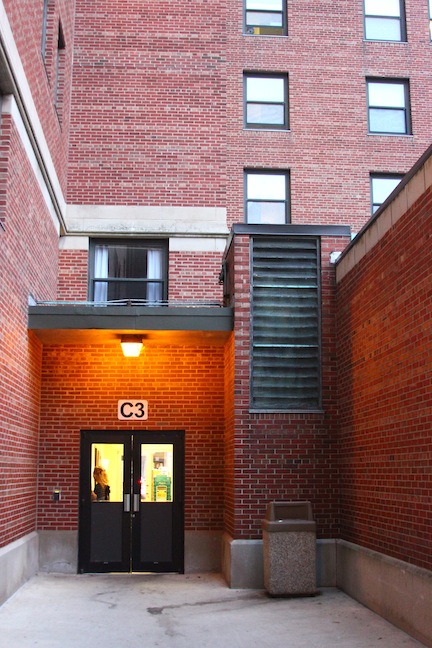 My mom’s window is one of those just to the right of the door.  My dad used to stand at the entrance and whistle up to her. 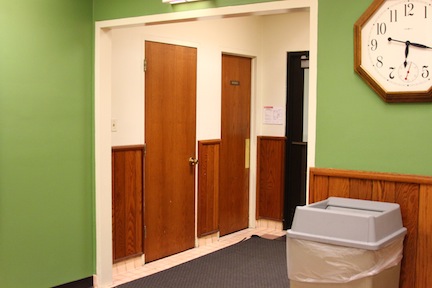 There were once phone booths in this entryway.  On the night they got engaged, my mom and dad crowded into one to call home and announce the big news…  They were immediately dragged to the dean’s office for standing too close to each other!