(A 4-minute video is at the bottom of this post.  Please pass it on to anyone you know who is transitioning too…)

It’s 7 am on my last day in Germany.  I hear birds chirping outside the windows of the two-hundred-year-old house I’ve been loaned by friends for my final week here.  Just two minutes down the road is the apartment I’ve lived in for eighteen years.  Another 40 minutes farther is the old farmhouse my parents bought in 1983, a quaint stone structure without central heating that was “home” to me in so many ways.  And a few minutes’ walk from here in the other direction is Black Forest Academy: a school, a community, a ministry, a haven, my life’s work and calling.

I’ve been “taking moments,” lately.  Breathing in lungfulls of Black Forest air and breathing out the kind of gratitude that brings tears to my eyes.  After so many years of preparing “my” seniors for transition out of here, it is sobering to be the one leaving this time.  We like to say that leaving is the easiest part—it’s those who are left behind who suffer most.  I beg to differ.  I was born in France, spent just 4+ college years in the States, then returned to Europe for my adult years.  It isn’t a continent I’m leaving.  It is everything that has defined me since my birth.

The meandering memory lane I’ve traveled since my pack-up-and-go return on May 24th has been bright with recollection, emphasizing again the marrow-deep significance of the places I’ve revisited.  My France-home is peppered with intimate memories, much like the tiny villages that dot its lush green flanks.  The small chapel nestled in the woods where I intended to be married some day.  The path where my sweet mutt, Muffin, got mauled by a German shepherd during a late afternoon walk (we cowered in a stranger’s garage until my dad came to pick us up: dog shaking, walker weeping).  The pond where, at 16, I discovered being “sweet” was overrated, and the nearby bench where I collapsed, crooked-smiled, after my first awkward kiss.  The illegal shortcut through the hills, where my brother would go sailing off into the fields in my father’s car to turn donuts in the fresh snow covering frozen soil.  The automobile showroom my dad and I visited, all decked out in our Sunday best, hoping the salesman would believe we were rich enough to test-drive the car we’d come to see.  The border crossing I took every day of my high school years, then every time I went home to Steinbrunn as an adult with a basket of laundry and a stomach hungry for mom’s inimitable cooking. 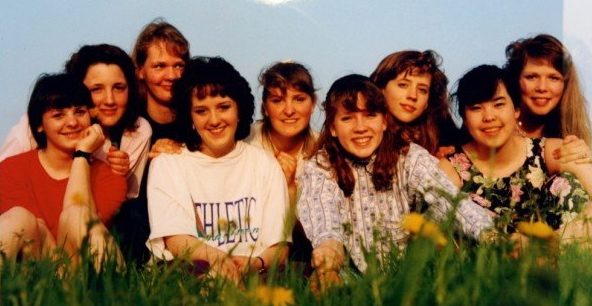 Germany too holds memory-treasures for me.  The field near The Monument where some girls and I ate pizza during my first year here, then reenacted scenes from The Sound of Music as we pranced, full and joyful, through wild flowers and tall grass.  My 9th grade classroom in Sitzenkirch with its view of cattle grazing and the distant outline of rugged castle ruins.  The point high above Riedlingen where Renée and I would trek to pray, Kandern, the Black Forest and its Hochblauen spread out, soft and strong, at our feet.  My favorite picnic table high atop a hill—how many times have I sat there trying to figure out which of the homes stacked steeply across the valley is mine?  The dorm kitchen where 10 pm, Saturdays, marked the beginning of meal prep for Sunday’s lunch…but the Barry Manilow tunes and friendship made those night hours enchanted ones.  The Holzen church and the clacking storks nested on its roof.  My small apartment (dreary and mold-darkened, now that it’s empty) where hundreds of meals were made for students eager for conversation: death, faith, morality, blockbuster movies and relational challenges…no subject was taboo.  The corner where some of them left a decorated Christmas tree they broke in to deliver during my first year in this home.  The doorway where ten police officers gathered, guns drawn, when a romantic prank went tragically (and comically) awry.

And then there’s the school.  The non-descript hallways where miracles happened on some level every day.  The choir room where crowd-control and music danced around each other and “herding cats” became my most-prized skill.  Where the guys in the back row transferred an entire drum set from one side to the other without my knowledge during class—big bass drum included.  Oh, the pride on the delinquents’ faces!  And oh, the laughter and mayhem and effort and extraordinary achievements that happened there.  Down the hall, the Creative Writing sanctum, where literary souls poured their hearts in black ink over thirsty pages…or leapt from desks into each other’s arms—just because they could.  Mari Ellen’s office, where quick stops turned into long conversations filled with laughter, rants or de-stressing silliness.  The auditorium where I worshiped.  The stage where school plays whooped and whispered and strutted their stuff.  The corners and nooks where life-altering exchanges happened lightening-fast, between classes, and the prayer chapel where my small groups sought and lived big change.

There have been times in the past few weeks, as my mom and I have stuffed, coaxed and prayed every last item of my past into boxes bound for Wheaton, when I’ve taken a sudden, involuntary breath—realizing again, in that moment, that this is truly the end.  As that breath bled into tightening lungs, I felt the enormity of the loss ahead.  The full, weighty substance of a departure from more than a place of employment—from My Life.  But even as the waves of realization swept over me, equally solid waves of certitude swept through me.  It’s my turn, now, to heed my own transition admonitions—live it fully, embrace the emotions (they’re a testament to wonderfuls remembered), mark the memories, be grateful for the past and expectant of the future.

My new life, the life God has prepared for me and prepared me for, will begin tomorrow, as my plane rises above the Black Forest one last time and carries me to my new home, my new friends—and my new calling.  Every place I’ve visited during this brief return to Germany has reminded me that the learning I’ve done here, the knowledge I’ve acquired, is too valuable to keep comfortably ensconced in this familiar and fulfilling place.  It is across the ocean that my message can have its greatest impact: in speaking, educating, advising, consulting, and creating new materials about the MKs I love so much.  So with a deep breath of Black Forest air, on this typically rainy morning, and with Kandern’s church bells ringing outside my window, it is with a tearful but grateful spirit that I say “Yes.”  I will obey, I will leave, I will rejoice in the new ministry to which my Maker has so clearly called me and I will trust for His provision.  I will grieve the ending and celebrate the beginning.  I will carry this place—this home—with me.  It is in my heart.  In my marrow.  It is forever part of me.
Just the Same, by Janet Pasqual, has been the soundtrack in my mind these past few days.  It’s in the video below: an ode to my life here, to leaving home…and to finding God unchanged.