YOU ARE NOT SPECIAL (A Graduation Address)

Some people dream of walking across the stage of Hollywood’s Kodak Theater to receive an Oscar. Others dream of standing on an Olympic podium while their country’s flag is raised.   My own ambitions might seem insignificant in contrast: I dream of being a graduation speaker at Black Forest Academy. If I were invited to speak on such an occasion, I’d focus my comments on a lie I’ve seen increasing numbers of MKs embrace over the past few years–the illusion that they are special or somehow superior because of all they’ve lived.  My address would go something like this:
Friends, Colleagues, Students and Graduating Class, it is with a deep sense of responsibility and gratitude that I stand before you today.  My hope is to impart three truths that will serve you well as you move into the future.  My prayer is that you will remember them as you seek to establish a new identity in a new place.
The first may cause some of you to cringe. In others, it will illicit relief. Here it is: You are not special.  I know for a fact that some people here and elsewhere accuse me of perpetuating the myth that TCKs are the multi-cultural Justin Biebers of the teenage world. They look normal, but they’re actually exceptional. They’re spectacularly wonderful and deserving of admiration bordering on worship. I have never—never—wanted to imply anything of the sort about you…or about me. I’m a TCK too—and we are not that special.  Not in the “worthy of unqualified admiration” sense. Not even in the “we should be extra lenient with them because they’re TCKs” sense. And yet. How often have I seen graduates leave their global childhoods and enter new lives with the mostly unspoken certitude that they are superior in every important way?  That attitude comes from two general mindsets: conviction of superiority (we really think we are special) or fear of inferiority (we’re afraid we won’t measure up). In both cases, an attitude that screams “special” upon entering college, Bible school or the workplace will do more to harm you than you probably realize. You are no more special, as a human being, than the Iowa farmer’s son who just graduated from Jefferson High School and has never set foot outside the boundaries of his county. You are not special—not in a superior sense of the word. But oh, you are so blessed. It’s easy to confuse being fortunate with being better. So though my first statement to you might have “chapped your hide” (that’s an American idiom for “to displease or irritate”—I know we MKs sometimes struggle with idiosyncratic expressions… I’ve gotten a bit better with them, though I don’t want to toot my own flute. Or blow my own horn. Whatever.) Where was I? Though my first statement might have irritated a little, my second is just as true: you are blessed. Look out the windows of this auditorium and consider the scenery your mono-cultural counterparts would give a limb to even glimpse.  Remember the trips you’ve taken—Rome, Kigali, Taipei, Quito. Remember the pranks you’ve played. Consider the growth you’ve witnessed in each other and in yourselves. Take a moment to ponder the number of cultures and languages represented in your class—the richness of heritage and the scope of experience. I can almost guarantee you that there is no graduating class in the United States today that can hold a candle to the many-faceted multiplicity of this class of MKs. You. Are. Blessed. But being blessed is not cause for swollen egos. Or, as the French would say, for swollen ankles. Being blessed is cause for gratitude. You are no more deserving of the treasures in your life than anyone else would be, and yet—it happened to you. YOU got to grow up in places where history was alive. YOU got to learn multiple languages at an age when “learning” was just playing. YOU got to travel across the ocean more times than the average mono-cultural person passes state lines. YOU own a passport, for Pete’s sake. You are blessed. Make of those blessings a benevolent force—make them something you’ll contribute to your new world, not something you’ll lord over it with pride. Gently broaden the horizons of the new friends you make. Kindly challenge mono-cultural interpretations of the world. Patiently set straight the misconceptions others might have of the places you love. As blessed young adults, your job is not to demand that the world recognize your uniqueness, it is to use that uniqueness to enhance your world. But in order to humbly love and enlighten the population of your life beyond these walls, abandoning any illusions of “specialness” and embracing the gratitude of “blessedness” must—must—come first. You’re not special. You are blessed. And you are just beginning.
When I stood in a church in Lörrach on my graduation day with the Class of 1986, wearing a hat and gown that had been passed down for four generations of seniors before me (those were the good old days when missionaries lived by the “nothing is disposable” rule…!), I could envision nothing beyond the pain of that day. I knew there would be tearful hugs out in the gardens after the ceremony was over. Followed by wistful reminiscing as the evening wore on. Followed by wrenching goodbyes at a time of night that made the pain of separation even more crippling than it ought to have been. I lived in the dark ages of MK history—pre-emails, pre-Skype, pre-Facebook—and this goodbye truly felt final. Though many of you will be conversing on chat by this time tomorrow, in my day a letter took a week to get from one place to the other. And it took another week for an answer to arrive.

That’s all I could see as I clutched my diploma. Well, that and how good Tillmann looked in his blue robe. I might have been in pain, but my hormones were still alive and well! I couldn’t imagine a life beyond June 27th, 1986. I knew Wheaton College was out there somewhere. I knew a career in communications might be waiting beyond college for me. I especially knew—KNEW—that nothing this world had to offer would live up to what had just ended. So I walked onto Wheaton’s campus with dread later that summer and spent the first couple of years trying to figure out what people had meant when they’d said “The best is yet to come.” The “best” was sucking the life out of me. It was in part because I’d arrived at college thinking I deserved to be considered special. And it was in part because I’d lost the ability to see how blessed I’d already been. Life got harder for a while for me after Black Forest Academy. There were wounds that needed healing—and that healing had to begin with an honest perspective on the past. Yes, my MK experience had been gilded with all the blessings I mentioned before—the languages, the travel, the adaptability to new cultures and places. But there came a point when I also had to acknowledge the pain a life in ministry had caused. The string of losses that had strangled my childhood. The abusive treatment of friends and strangers. The sense of alienation that had plagued me both abroad and at “home.” The hypocrisy I’d witnessed and the neglect I’d endured—all in the name of God. I had some scores to settle and some bitterness to vent. The God who had guided my family overseas hadn’t protected me the way I thought He should have. He hadn’t spared me or strengthened me or held me as tangibly as I wanted Him to… For a while there, there was little I was sure of. As a result, there was little I truly desired, either professionally or personally. 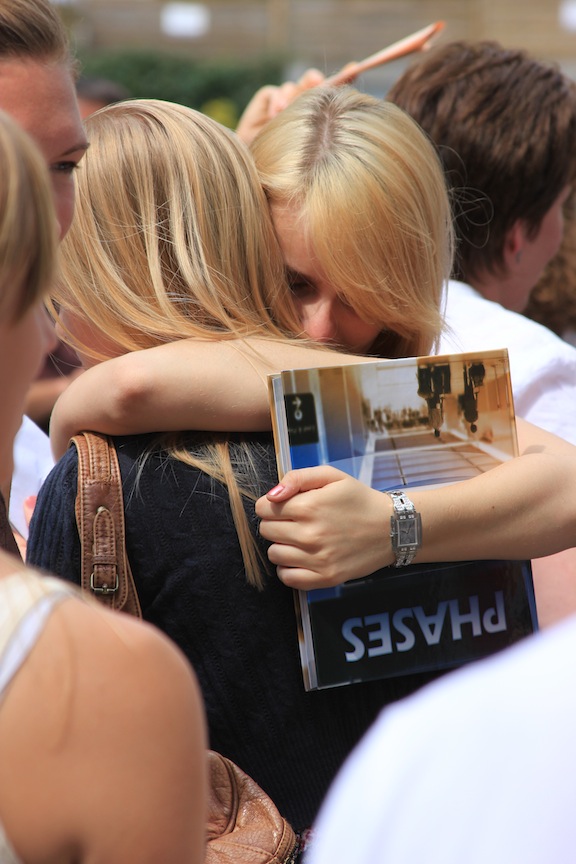 It took healing before I redeveloped a hunger for life, a thirst for new experiences. If you need that too—seek it. Pursue it. Find someone who has the understanding and the knowledge to help you. Here is probably the most important of the “rules for living” I’ve embraced: never doubt God. If you feel that He has hurt you, ignored you, rejected you or neglected you, question your conclusions—not Him.  I have no illusions that any of your lives have been easy to this point. But I have the certainty that with healing come serenity and faith, regardless of circumstances. That’s the best I can hope for for you. As it turned out, the best really was yet to come for me. Because after those 3 1/2 years of college and the 14 months in the workplace afterward, God called me back here. Back to this school where my crush’s name was still written under my desk on the top floor of the main building. Where the piano on which I’d exorcised my teenage angst still stood in what is now the copy room upstairs. Where some of the textbooks still bore traces of my highlighting pen. Not the science textbooks. Neither my pen nor my eyes ever really touched those pages.

Graduating Seniors, you are not special. But you are blessed. And you are just beginning. Some of the most notable figures of our world have TCK backgrounds: Christiane Amanpour, JRR Tolkien, Madeline Albright, Reese Witherspoon, Barack Obama, Kobe Bryant…to name a few. Because of all you’ve learned and experienced, your potential is immeasurable. Your borders are vast, your skills are rare and varied, your capacity for growth, innovation and adaptation is unparalleled. And your future begins NOW. So enter it with a healthy dose of humility, navigate it with a firm grip on gratitude, and build it with the conviction that though there may be some challenges ahead, your journey into fullness is just beginning to begin.
May God continue to bless you and keep you.

(For the series “The Lies MKs Believe,” please click here.)