Josh, an 18-year old senior at Black Forest Academy, was home in Italy with his 4-year old brother, Sam. (Pictured below) They were sitting on the balcony one night, looking up at the stars, and Sam was saying the cutest things.

Josh listened and smiled, content to be sitting under the Italian sky, spending time with a brother he saw only on Christmas, Easter and summer breaks. 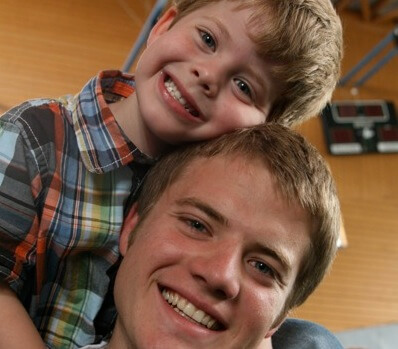 Eventually, Sam said, “Hold me.” So Josh took the little guy into his arms and they stared up together. “I miss you, Josh,” Sam said. “Ask me why I miss you.” Josh dutifully repeated the question. And Sam said, “School. I’ll miss you when you go back to school.”

And then he uttered an astounding sentiment for a child his age. “But Jesus is here and he’ll make it okay.”

At the age of four, toe-headed Sam had already developed a theology of grief, a spiritual mechanism that allowed him to deal with his beloved brother’s imminent departure. Yes, it’s a beautiful thing. And yes, it’s also sobering.

The statistics don’t lie. By the age of 18, average TCKs will have experienced 8 major moves (Source: Interaction). They’ll also have lived in a transient community where people are constantly coming and going, some with predictable exits and others without warning at all.

The lie MKs derive from such a goodbye-loaded existence is straightforward: everybody always leaves.

Loss is as common on the mission field as big hair at a Bill Gaither convention. It doesn’t only apply to people. With each of those 8 moves mentioned above, an MK will experience a host of losses:

But none of those losses are as devastating to a young person as the loss of people. The first people we lose (sometimes without even realizing it) are relatives: grandparents and cousins who drive to the airport to see us off and whose presence in our lives loses immediacy and “realness” with every year we spend overseas. I grieved when my grandparents passed away, but not because I was sad they’d died. I grieved because of the realization that I’d really never known them. I had grown up visiting them for a week during my HMA summers, but I felt as close to them as I did to anyone else I saw rarely.

MKs who attend boarding school might also feel the loss of their immediate family, though modern technology has made it so much easier to keep in touch by Skype, affordable phone rates and emails. That requires a commitment and diligence on the part of parents that isn’t always there, given the taxing demands of a life in ministry.

For children whose parents are too busy to call or write, the loss is felt on a visceral level.

And then there are those peripheral losses that happen like random meteor strikes, leaving craters that can neither be filled nor erased.

I grew up at the European Bible Institute, immersed in a subculture in which a new batch Bible school students arrived every year and another batch graduated. As a child who was mistreated in the French school system, it was in the young adults of EBI that I invested my heart, devoting myself to these kind and compassionate “grown-ups” who saw in bucktoothed Little Shell someone to be heard and embraced.

Every time I fell into friendship with another student, I kicked myself: they were going to leave in a year or two anyway, so why get attached? Like many MKs, I’d tried to adopt a love-no-one mantra at a young age, my attempt at sparing myself from more painful goodbyes.

But I’d soon discovered that I craved meaningful relationships more than I feared another loss.

I could try all I wanted to remain aloof in order to avoid more painful goodbyes, but a life of solitude seemed a worse fate than familiar grief.

Adding to the weight of losses is the transient nature of the missionary community. We know that the time span missionaries devote to overseas work varies, and there’s a certain security in knowing who is there for one year, who is there for two years, and who is there for life. We know the goodbyes will be inevitable, but we can also brace ourselves for them when we see them coming.

It’s those unexpected departures that catch us off-guard and unprepared.

Having to evacuate a country in the middle of the night, as some of my former students had to do. Seeing best friends get on a plane because a sudden family emergency had forced them to move back to the States. Watching others slip out of our lives because their mission requested they move to another field, because they ran out of funding or because of interpersonal tensions.

There are countless reasons for missionaries to “move on,” and each one of them leads to the kind of losses that can cause difficulties in relationships, life stability and personal vulnerability.

Fear of loss can be one of the most influential motivators in an MK’s life. The area in which it is most obvious is relationships. Because we know (from experience) that we’ll only have our friends for a limited amount of time, we often act in predictable ways:

Another trait common to most MKs is that we tend to accumulate and relive our grief. When someone we love leaves, it’s not just that loss that burdens us. Every departure brings up all the pain and tearing-apart of previous departures.

When I was growing up and had to say another goodbye, I would feel paralyzed with grief, even when the person leaving wasn’t necessarily a close friend. But I wasn’t just grieving for that departure, I was also grieving for every single time I’d had to say goodbye in my life up to that point.  Grieving another loss. Angry at another loss. Bemoaning the lifestyle that had caused them to happen so frequently and wishing it didn’t have to happen again and again and again.

Every goodbye released the accumulated angst and sorrow of a lifetime of losses, and there was little anyone could do to soothe the jagged pain.

Unfortunately, the world of missions will always be a place where people come and go at dizzying speeds, where transfers happen without warning and friendships develop fast and most often die suddenly.

Even in my adult years, I approached every major goodbye with feelings that seemed more suited to sudden death than to geographical distance. It wasn’t until my mid-twenties that I realized that every goodbye triggered the re-lived, accumulated grief of a lifetime of losses. The best anyone can do to help an MK coping with accumulated losses is to point out that a departure isn’t a death. With modern social networking sites, email, Skype and so many other communication tools, there’s no reason why a friendship should just disappear because distance intervenes.

We may lose proximity, but we need not lose love.

The lie is that “everybody always leaves.” Its antidote is fourfold:

Allow me to repeat that, because if you’re an MK like me, it’s a Truth we’d all do well to remember: the benefits of relationship are worth the risk of loss.