(NOTE: You can now subscribe to this blog by sending an email to michelesblog@gmail.com and writing “Subscribe” in the subject line.  You’ll receive a brief email every time a new blog entry is posted.  How easy is that?!)

To honor the nearly 20 years I’ve worked at BFA, the school recently gave me 80 euros to spend on whatever I wish.  I gave it some thought and concluded that I should use the money to buy something ultra-European and antique.  So I took off for Mulhouse, a large French town about 40 minutes from here, and entered my favorite “used everything” store.  Furniture, stuffed animals (the formerly alive kind), hats, jewelry, videos and LPs.  The small store is a treasure trove waiting to be explored. 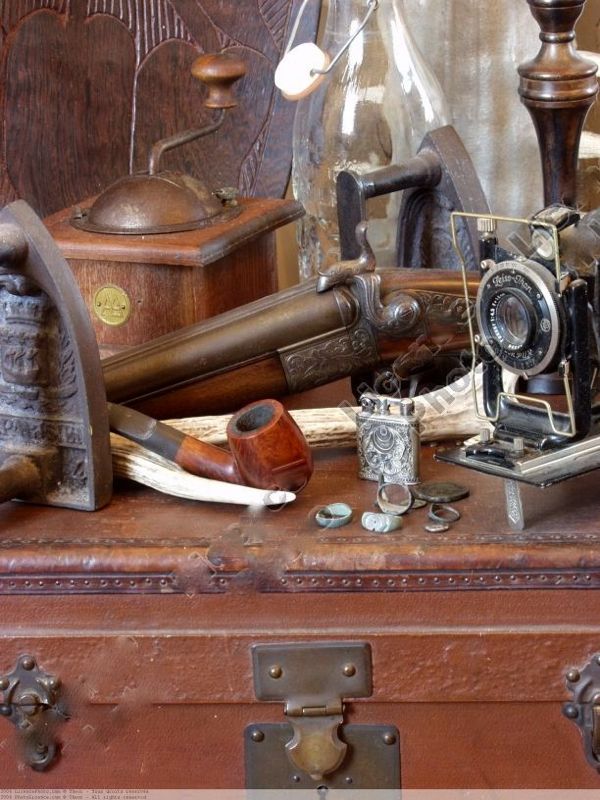 As I wandered down pseudo-aisles crowded with items that were either too expensive or too tacky, I began to lose faith in my treasure hunt.  And then, in the farthest and darkest corner of the store, I found this: 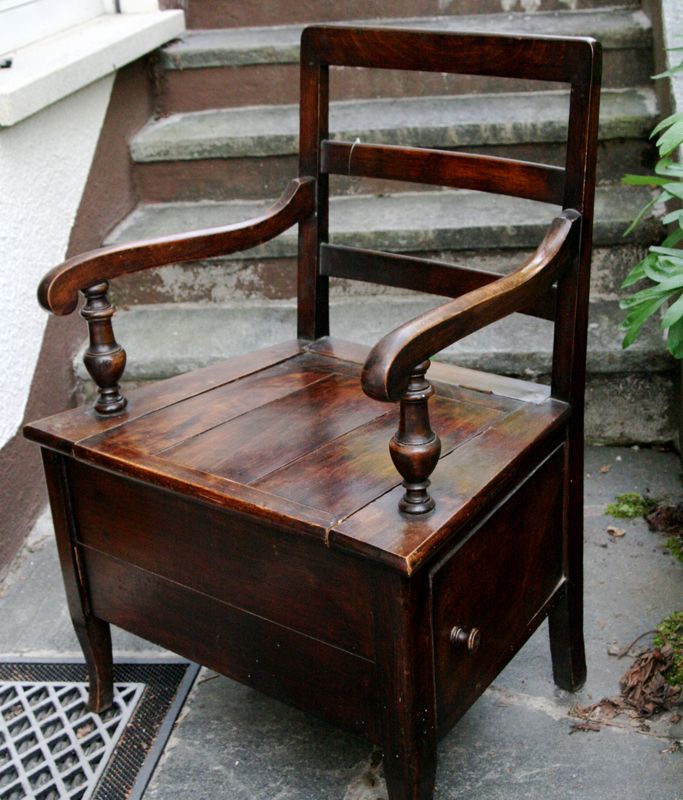 Now you might be thinking, “It’s a chair—big deal.”  Ah, but it’s an antique chair.  A hand-made chair.  A well-used and time-marred chair.  And it’s also…drum roll, please…A POTTY CHAIR! 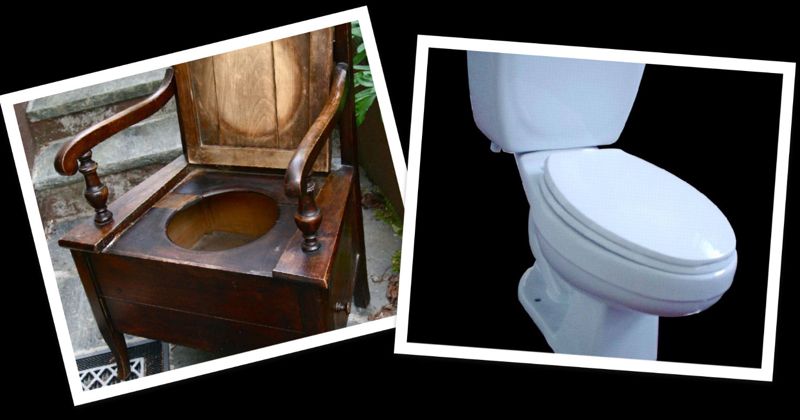 The seat is hinged, so it flips up and down.  And see that little door to the right of it?  That’s where people used to insert and remove their chamber pots (aka. thunder mugs).  The boards underneath the chair are suspiciously stained, but I’m not going to dwell on that right now.  Instead, I’m going to dwell on the price tag (80 euros even!) and on the fact that my quirky, conversation-worthy find now has two giant teddy bears crowded into its broad seat as it thrones in my living room. 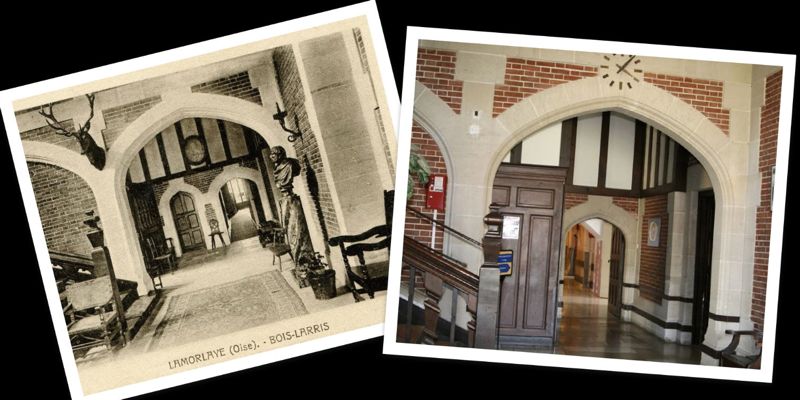 (Above, an antique postcard of the main entrance to the manor, and a photo taken in April.)

I’ve always been a big fan of the “before and after” concept.  Finding my dinosaurian toilet revived that enthusiasm in me and spurred me to look for more treasures on Ebay.  Imagine my elation when I found this:

An authentic photograph of the Meunier Manor (one of the two main sites of my last novel)—and here’s the kicker: there are Nazis lined up and saluting in front of it.  It is only in the last decade or so that France has acknowledged that the manor was used by the Nazis, during World War II, as a “Lebensborn” (Spring of Life) in which they attempted to bring as many Aryan children as possible into the world, and by any means imaginable.  There were other centers like this one across Europe, especially in Scandinavia where women are generally blonde and blue-eyed, but this is the only one in France, and it’s been a tightly guarded secret for decades.  The Manor is also, amazingly, the building in which I had classes for two years as a child.  At that time, the Red Cross, which now owns the building, was running a small school for the handicapped students who lived there and for a few kids from the town of Lamorlaye.  I was one of those. 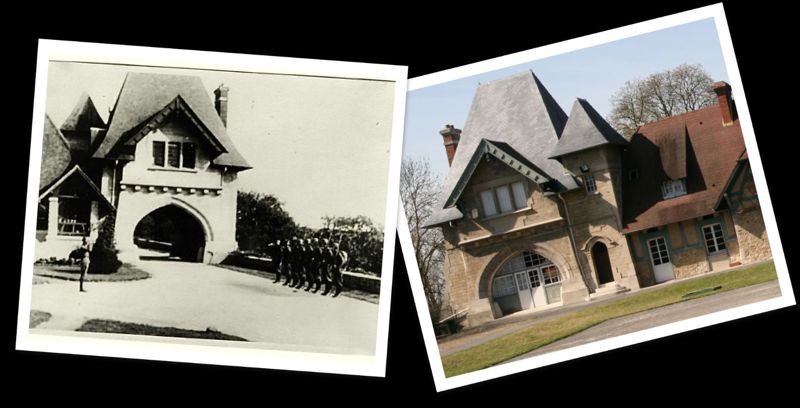 (Above: The original shot, and one I took from the other side of the same building.)

When I returned to Lamorlaye a few weeks ago, I was allowed onto the grounds to take pictures.  Above is a before and after shot that is truly precious to me.  The historical value of the WWII picture is undeniable, as most of the documents pertaining to the Lebensborn were destroyed with the Nazis left town.  And the juxtaposition of such horror (in which I immersed myself during the time I was writing my novel) and my childhood memories in the same place is quite honestly dumbfounding.  I wasn’t able to purchase the original picture (someone beat me by 50 cents!), but I did get the owner to sell me a scanned copy, and for that I’m thrilled! 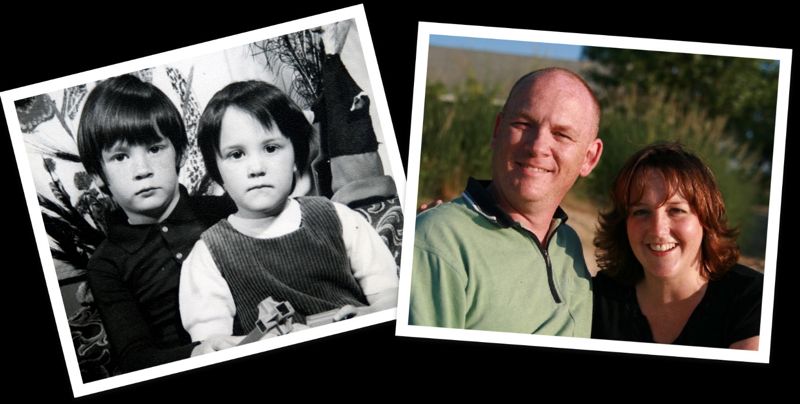 (Above, my brother and me looking thrilled by the French school system, then last summer.)

I’m a big fan of “before and after” comparisons.  Those “after pictures” are the visible product of sometimes unspoken narratives—the end result of roads chosen, time burned and lives invested.  Several years ago, when I was in a Kahlil Gibran state of mind, I wrote a parable about the Prodigal Son titled “Postcards from the Pigsty.”  Oh, I didn’t retell the usual tale—I figure the biblical writer did a fairly good job of that.  I simply wondered out loud if the prodigal son had ever told his story after his return to his father’s house.  I wondered if he had made it a point to describe the “before picture” of his life—the pigsties and filth in which he’d lived—so those who met him after his transformation would not only know what had happened to him, but would also gain a clearer and deeper understanding of the father who had loved him through the darkest years and welcomed him back, unquestioned.  In my story, he didn’t speak of his past.  And his much younger brother, unaware of the journey that had nearly destroyed and ultimately saved the Prodigal Son, had been doomed to repeat his older sibling’s errors. 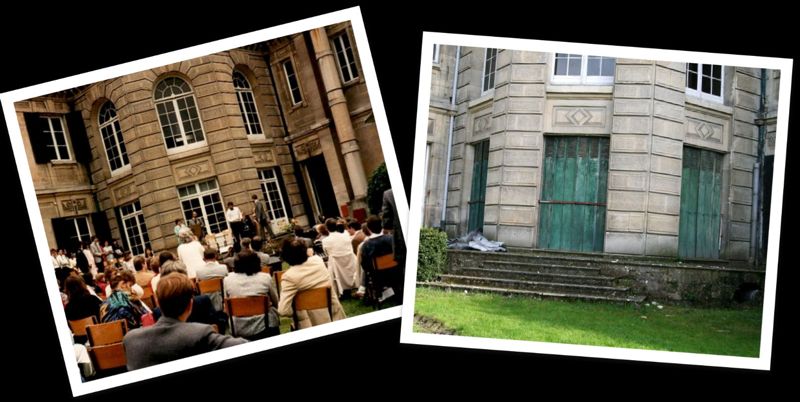 (Above, the Lamorlaye castle in its glory days, then pictured in April.)

I might as well have called my parable “The Importance of Before-Pictures.”  It ended like this:  “It is the the image of that younger brother that keeps me going back to the pigsties of my past to retell my story of suffering, rebellion and redemption.  I cannot keep silent when a generation of younger “siblings” doubts how vast and unconditional God’s love can be.  They need to know about the years I hated God.  They need to learn about the years I blamed my problems and the world’s on Him.  They need to hear about the rage, the despair, the irreverence and the rejection.  If they don’t know how much He has loved me in spite of me, they won’t know either how much He longs to love, forgive, and embrace them too.  “Why are you happy?” they sometimes ask.  “Let me tell you about a pigsty,” I answer.  Only then does the filth still lodged in my existential pores serve to caution, spare and heal others. 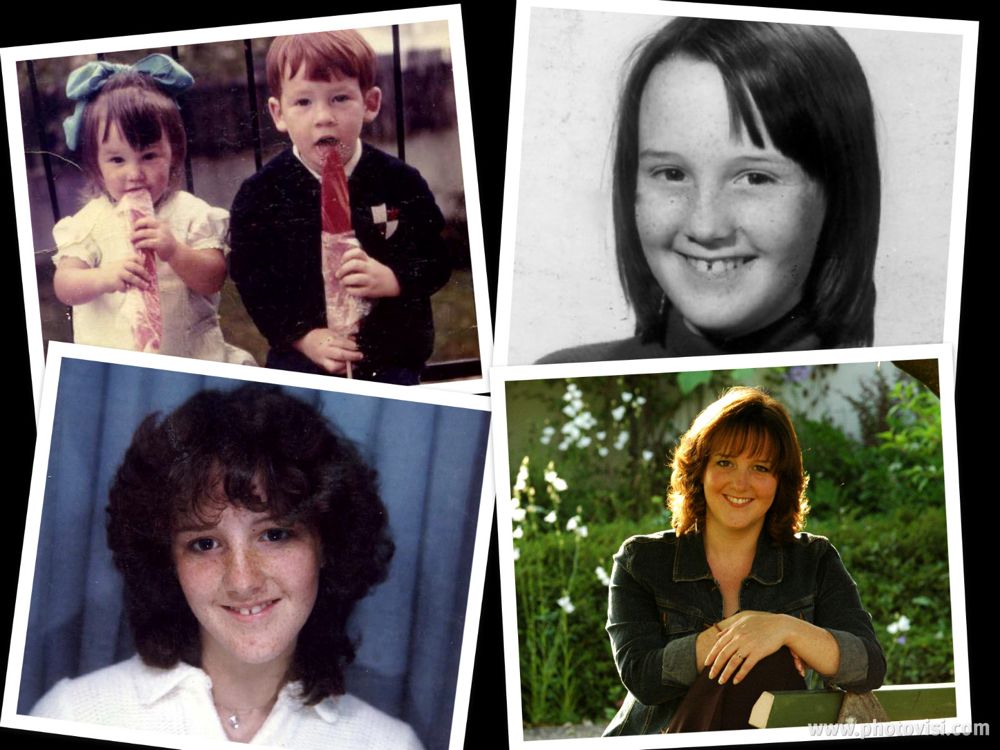 (Note the deadness in my eyes in pic #3.  Those were my darkest years…)

Have you buried your “before pictures”?  If so, I encourage you—I urge you—to explore them once again and to let God use your pain and the worst of your mistakes to change the lives of those who need to hear your redemption story.