MISSIONS AND DEATH BY APNEA

It’s a lazy Sunday afternoon–possibly the last lazy afternoon there will be until Christmas break.  I’ve been marking the moment by multitasking in my favorite way: watching TV (sorta) while surfing the Internet, writing emails and keeping my eyes off the small mounds of un-put-away items that are testaments to the suitcase-explosion that happened upon my return. 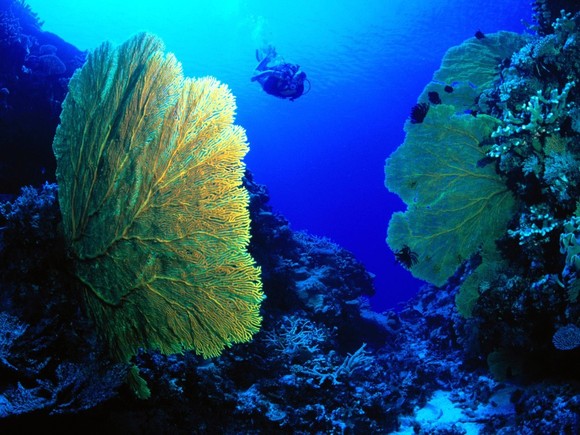 My multitasking came to a screeching halt a few minutes ago, when the Swiss TV station I had on more for background noise than for actual entertainment started to show a documentary on a French man named Loic Leferme, a world-record holder in free-diving.  He died in 2007, while trying to best his own 171-meter (561 feet) depth record, with no respiration devices other than the air he had in his lungs when he left the surface and was propelled downward by a motorized pulley system. 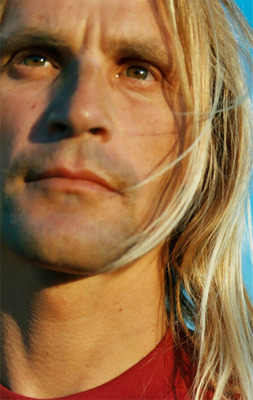 I was fascinated–not so much by his underwater exploits as by the sheer obsession this man had with finding the limits of his physical and mental capacities, then surpassing them over and over again.  Each dive, though carefully choreographed and monitored, was Loic’s death-defying statement that nothing was too much for him, that he would not succumb to banal human limitations and that the universe would not determine what he could and couldn’t withstand at depths where the water pressure on his oxygen-deprived body was equal to several hundred tons. 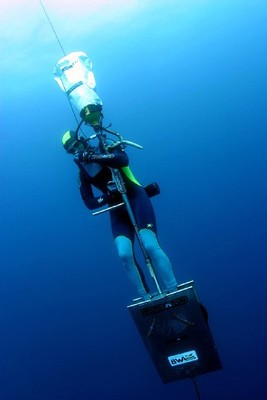 Loic died in 2007.  No one knows exactly what happened.  The balloon that was supposed to carry him back to the surface never deployed and, after 8 minutes under water, he was finally found floating unconscious by his best friend and trainer, slowly returning to the surface where his wife and children waited in inflatable crafts. 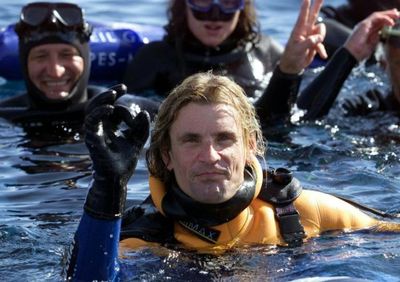 I’ve been glued to the TV screen for the better part of the past hour–glued to the interviews of this soft-spoken man whose zen-like attitude was probably a key ingredient to his success.  When your lungs shrink to a tenth of their size because of the water pressure and your blood vessels and airways collapse, an undramatic mind is probably a life-saving trait.  The interviewer kept asking the same questions:  Why do you do it?  Why is it important to you to risk your life in order to see how far you can push yourself?  What’s the benefit in being able to brag that you’ve nearly died a dozen times for the sake of a ‘sport’ that few know about and even fewer care about?  His answer was always the same.  With a soft, awe-filled smile, he said, “I cannot stop until I know how far I can go.” 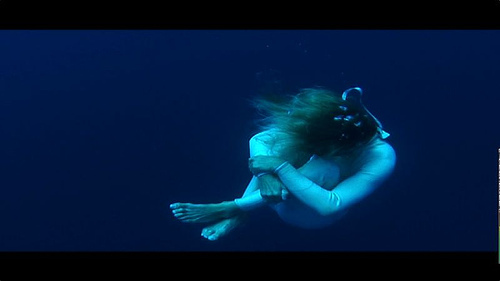 I know that the parallels that popped into my mind as I watched are probably fairly controversial, particularly in the missionary subculture.  They took me back to November of 1991 and my arrival in Germany.  I came to work as I writer in the communications department–and have yet to do so.  On my first day on campus, BFA’s then-director asked me a few pointed questions.  I was too naive and jet-lagged at the time see the trap before it closed.
Director:  So…you acted in a couple plays in high school, right?
Me:  Yup.
Director:  And you sang in choirs too, right?
Me:  [proudly]  In high school and college.
Director:  And I seem to recall that you were an A student in English?
Me: [too flattered to be perceptive]  I was indeed.
Director:  And since you grew up in France, you’re probably fluent in the language…?
Me: [flattery still rendering me less astute than I like to be]  I am. 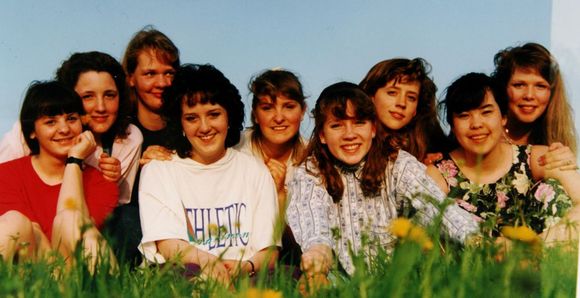 The rest of the conversation is a blur, mostly because what followed sent me on a two-year spiral that started with exhilaration and ended in something close to abject despair.  Based on that in-depth interview with my director, I was told, in essence, “Great!  So you can teach two levels of English, two levels of French, direct the school play, direct the school’s ensemble, and commute every day from France while attending every school event and developing relationships with the students…right?”  The missionary neophyte (and never-before teacher) in me nodded dumbly and considered the assignment an honor.  I dove in with a happy heart and great expectations, determined to push back the boundaries of what I thought I was capable of achieving.  I was the Loic Leferme of the mission world for those two first years at BFA, diving to depths of stress and over-commitment that crushed relentlessly until I nearly imploded. 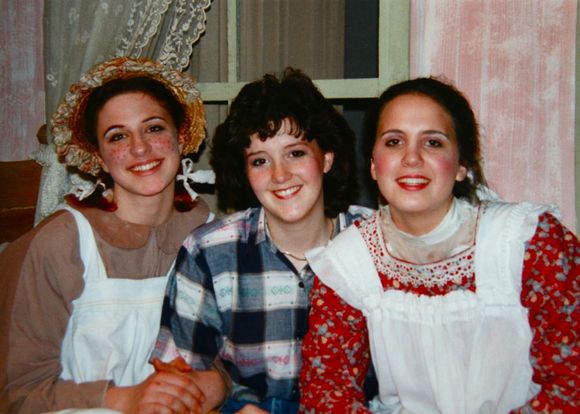 There is no mystery as to what happened to me when I reached the bottom.  I was spent.  I had nothing left.  I still loved BFA and I still loved my students, but in my quest to meet everyone’s agendas without any concern for my own needs, in my attempt to broaden the restrictions of my humanity, I had found my limits–and, finding them, collapsed.  Oh, I still managed to do my job and be pleasant and direct plays and concerts that probably weren’t failures, but I’ve got to tell you that when the impulse to steer your car into a tree on your drive home becomes routine, there’s something severely wrong.  Granted, there were other factors in my implosion, but the superhuman effort of pushing myself beyond what I could achieve was the element that made it so impossible for me to cope. 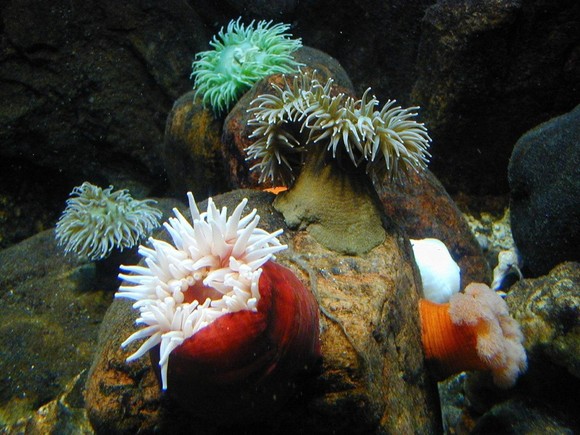 I had the honor of speaking to BFA’s incoming staff this week.  It’s one of my favorite activities.  I love to see the dedication and enthusiasm in their eyes–the eagerness to “learn” these students and to be the best adult influences they can be in their lives.  I hope–HOPE–that someone is there to whisper in their ear what Mrs. Dailey said to me so many years ago.  It was the eve of my departure for Germany.  My bags were packed and lined up by the door of my cockroach-infested apartment in Wheaton when my high school English teacher from BFA called.  She wished me well and, in words I’ll never forget, said, “Don’t be afraid to say no, Michele.”  She knew.  She’d lived the BFA experience.  She also understood that as missionaries, we feel guilty setting parameters and respecting the boundaries of our physical and mental stamina.  Saying, “I can’t do that” is tantamount to treason and sometimes earns us something that looks like scorn.  Saying, “It’s too much–I have to pull back” feels like a shameful admission of weakness or ineptitude, and in this environment where everything we do is supposed to be done for others, it also feels self-absorbed and unworthy. 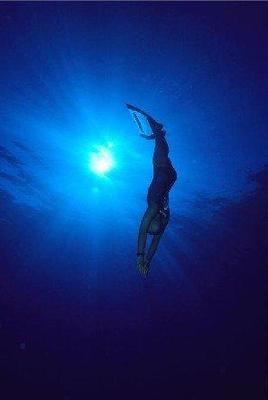 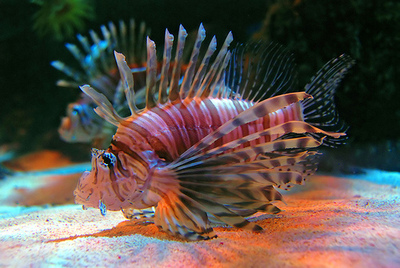 It wasn’t until I’d been at BFA for several years that I began to see the wisdom in Mrs. Dailey’s advice.  It was several more years before I found the courage to practice it.  And every time I did–to a certain extent, every time I still do–I feel that pang of guilt.  I should be a better missionary.  I should take on everything the school throws at me. I should be able to function on fewer hours of sleep.  I should be able to juggle a hundred responsibilities and still find time for true ministry.  I shouldn’t be so self-absorbed as to want to protect myself.  Leave it all on the court, right?  No holds barred, right?  It’s all for God and He demands the most of us, right?
Wrong.  It’s out of obedience to God–out of respect for the importance of the ministry I’m engaged in–in understanding of the way He has created me–that I must monitor my life, that I must make wise decisions about my investment in work and ministry, that I must protect myself from the burnout and over-commitment that is probably even more prevalent in the missionary world than in the secular business world.  It’s more insidious too, because we live in a glass house where others are so aware of our every activity that we expect their condemnation if we fail to live up to their idea of how busy and how overwhelmed a “good” missionary is supposed to be. 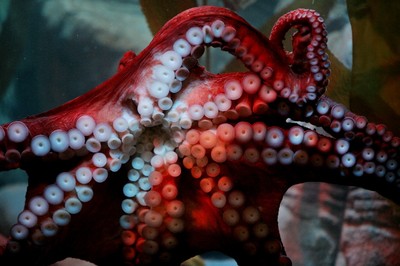 What I know is this–if I hadn’t calmed my Loic Leferme compulsions, if I hadn’t learned to acknowledge the dangers of my quest to be all to all, I wouldn’t still be here nineteen years later, facing the beginning of a new school year with joy and curiosity.  At best, I might have quit several years ago and found a traditional 9 to 5 job where the pressure to “exceed” wasn’t so wrapped up in the nebulous concepts of servanthood and self-sacrifice for a higher calling.  At worst, I might have finally turned that steering wheel and ended my endless (and unachievable) preoccupation with surpassing the physical, emotional and mental boundaries God placed in me.  Don’t get me wrong–I’m not slacking.  My life is full with the academic, extracurricular and relational commitments that keep me joyfully serving at Black Forest Academy.  But I’ve also learned that God is pleased when I make the tough decisions that allow me to stay functional in a world where burnout is, sadly, far too common. 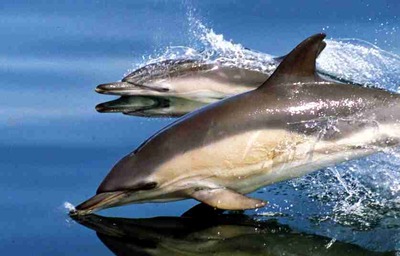 My encouragement to each of you, regardless of your profession or your stage of life (new missionary, veteran missionary, BFA student, college student…), is that you too would heed Mrs. Dailey’s advice and “Learn to say no.”  Learn with prayer.  Learn with wisdom.  Learn with a big-picture perspective that allows for longevity.  Learn with a healthy focus on God’s approval, not man’s…lest we all become the Loic Leferme of our worlds.