(The initial part of this post might seem a bit long, but if you’re a senior, someone who loves a senior or a bystander who wants to understand the unique phenomenon of a BFA graduation, I encourage you to forge ahead…)

With only two weeks to go before grad, there’s the usual sense of foreboding and celebration in the air, an emotional contradiction that isn’t always easy to manage.  BFA graduations aren’t your run-of-the-mill cap ‘n gown event.  In the States and Canada, graduation means getting a diploma.  Period.  Here, it means getting that diploma, then leaving this place where students have lived and found a home, saying goodbye to friends who have become closer than family, and, for most of our seniors, entering into a life they can’t imagine on a continent they don’t recognize as home, with little certainty other than the reality of impending challenges. 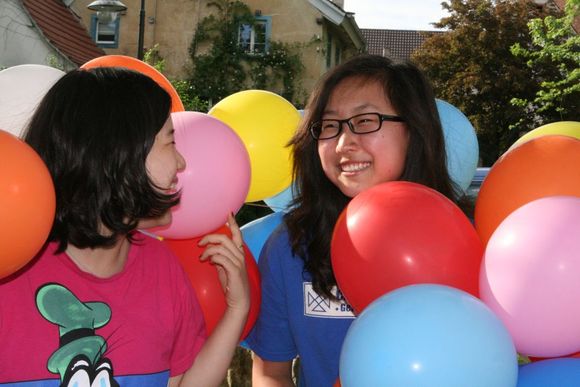 As we approach the larger milestones of life, whether it be graduation, a cross-country move, or relationship changes, we all tend to react in predictable ways.  In the case of students approaching a BFA graduation, the behavior usually falls into one of the following categories.  Can you pick out the one that most closely resembles you? 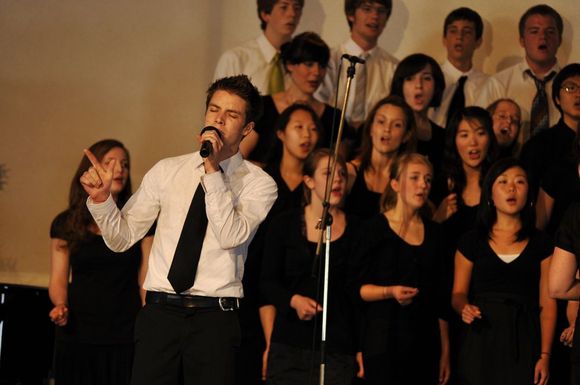 – The Ostrich Approach: we laugh, we joke, we do everything within our power to convince ourselves that it isn’t really happening.  We act as though the past few years at BFA and the coming end of this experience really don’t matter that much to us.  Downside: this approach certainly cuts down on the immediate pain, but it alienates us from those who are living these days in a realistic, profound way (usually exactly the type of friends we need at this time!), and it only makes the pain–when in finally comes–more maiming and solitary.  It robs us of closure and of the chance of making new memories. 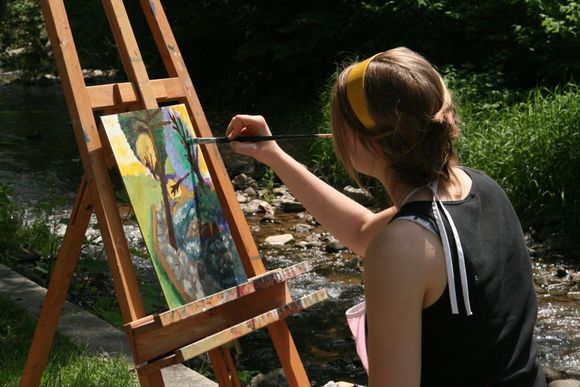 – The Cinderella Man Approach: we pick fights, we concentrate on everything that drives us crazy in other people and places and events, we get belligerent, impatient, and generally unlovable.  Downside–we risk injuring relationships that have been meaningful until now, we offend “innocent bystanders” who have nothing to do with the real issues causing our reaction, and we live in anger, which is toxic to us, to our environment, and most importantly to our ability to end well. 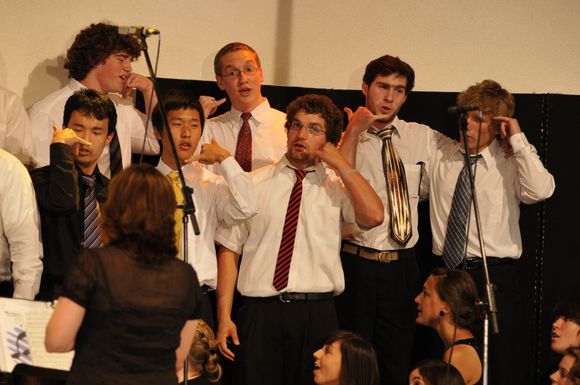 – The Martyr Approach: we see ourselves as victims of the circumstances that make the milestone necessary.  We figure God or BFA or our parents are deliberately causing us pain.  We feel sorry for ourselves and crumble inward.  Downside–we’re so consumed with feeling sorry for ourselves that we are no longer capable of communicating with our friends in a profound way.  Our friendships suffer and “good” goodbyes are nearly impossible. 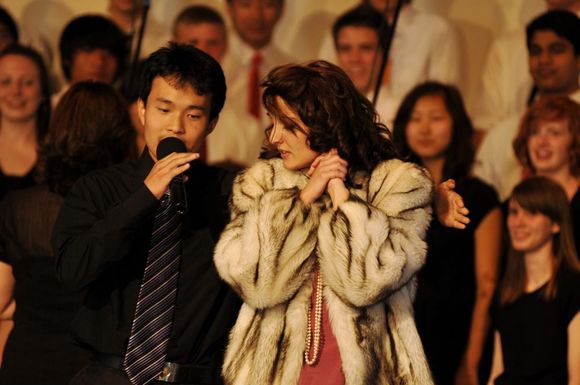 – The Diva Approach: we go hysterical.  We weep and wail and moan and groan and beg and plead and sputter and get caught up in a maelstrom of emotion.  Don’t get me wrong–grief is a necessary part of any milestone as momentous as a BFA graduation.  There should be sadness, there should be tears, there should be earnest expressions of your love for others and your fear of losing them.  Honesty is absolutely at the heart of healthy transitions.  But extreme, protracted, over-the-top emotional reactions can have downsides.  They take time away from more beneficial activities like conversations, reminiscing, sharing of hearts, deepening of bonds and living the ending together rather than alone.  They also scare off the people we love who might not want to spend their final days in an emotional vortex and would rather invest their time and energy in more beneficial ways. 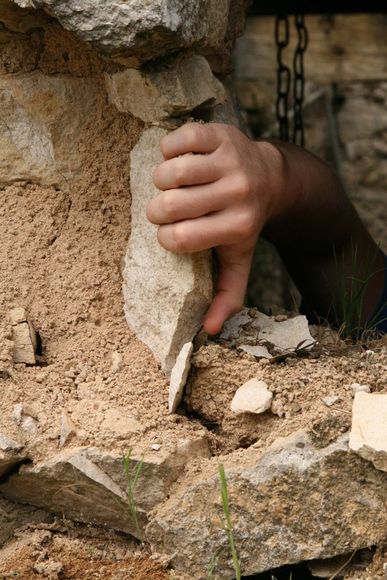 I’ve learned one simple truth from the 17 year-end ceremonies I’ve witnessed in my tenure at BFA: we’d be wise to pattern our final days after Jesus’ example.  All of the approaches listed above yield nothing but added grief on the big day and after, because we realize only too late that we’ve wasted time, squandered friendships, hurt others, and deprived ourselves of honest, healing grief.  What did Jesus do?  (And is it time to order up some W-D-J-D bracelets?)

– He allowed Himself to grieve.  He went off alone to tell God of His fears and pain.  He took time for Himself in order to fully realize the enormity of His final days…including the emotions they required.

– He spent time with those closest to Him.  In the final hours, He didn’t go out and try to drown Himself in any activity that would take His mind off the inevitable.  He chose to spend the time with those He loved, communing
and sharing.

– He said what needed to be said.  He spoke to each of His disciples, gave them encouragement and guidance.  Even in the face of the horror ahead of Him, He focused on their needs as much as His own.

– He continued to invest Himself in others.  It could have been “all about Him”–and certainly no one would have blamed Him!  But He loved others enough to continue to serve them.  He continued to build His legacy in the lives of others right up until the END. 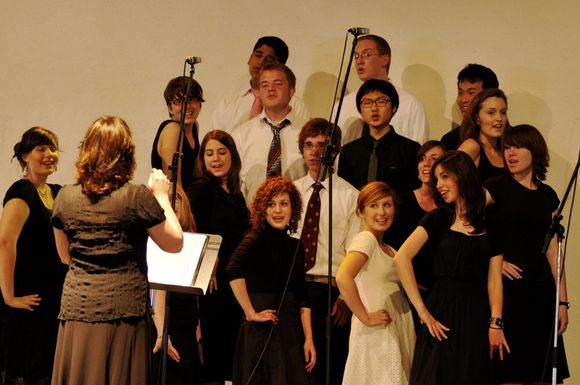 My fear for the seniors I love this year is that the end will turn them inward, their fear will fuel misplaced anger, and their grief will disarm any form of impact they might still have on others who still need them.  You might not recognize your “symptoms” as fear or grief, but bear in mind that most of your emotions will be manifestations of those–just cloaked in more manageable forms!  It is only human to react as Ostriches, Fighters, Martyrs and Divas–but we are called to aspire to a higher standard than mere  humanity.  It’s not easy–I fail more often than I succeed.  But I’ve glimpsed the benefits of loving others to the end, embracing change for what it is without fighting it or hating it, relying entirely on God for sustenance during emotionally draining times, and refusing to take out my grief, my frustration, or my fear on the innocent bystanders who populate my life. 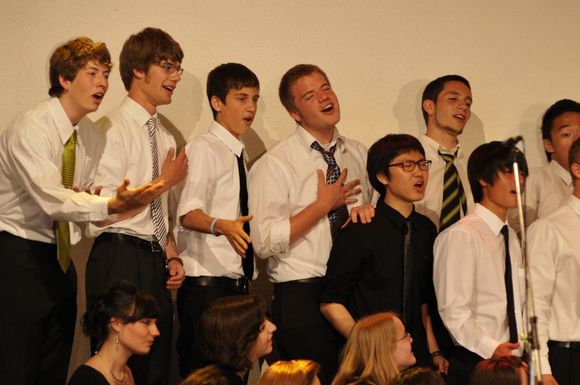 So my advice to you, beloved seniors, despite the fact that you never asked for it, is to make the end of this year something profitable not only for you but also for those around you.  Don’t let emotions morph you into something you’re not.  Continue to earn the respect of others, to be thankful for large and small acts of kindness, and to treat others as your would like to be treated.

AND NOW FOR THE BIG KITCHEN REMODEL!

I should have known.  When my landlady informed me that a plumber, a carpenter, a painter and a project overseer would arrive at 7 am on Monday, I pictured this: Sadly enough, what turned up was more like this: 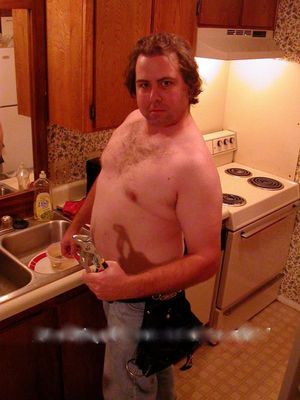 So I spent the next three days studiously avoiding my apartment while the workers tore out my ancient, mismatched, ugly and “unfunctional” kitchen and replaced it with something that does for my brain what fireworks do for the 4th of July.  I was only mildly traumatized the multiple times I arrived home to find toothless and shirtless men in my kitchen, but I was thoroughly traumatized the day I arrived home to find one of them exiting my bathroom in a blue cloud of ick.  BUT–it was all for a good cause, as the following pictures attest!  The left-hand picture is always the “before” shot…  Trust me when I say that the old drawers all fell out regularly, the sink had a leak that had created a cess pool underneath it, the doors hung askew, the fridge was sputtering its last, and the stove only had two working burners! 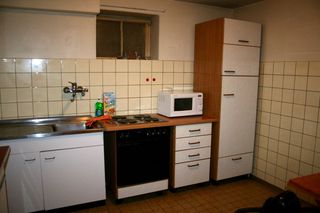 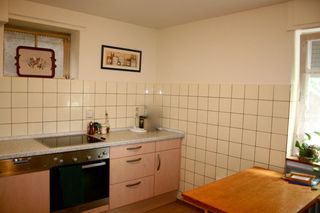 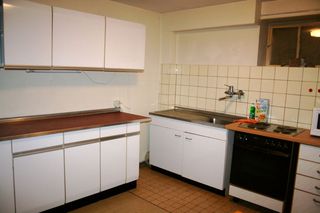 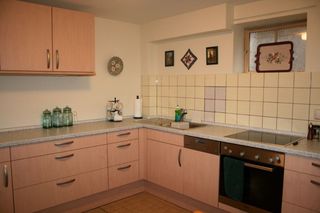 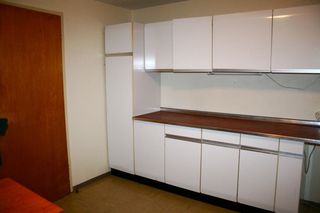 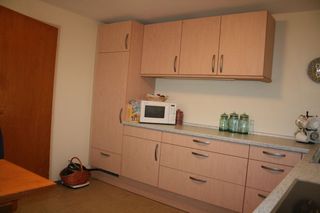 Joy of joys, for the first time in my adult life, I have a dishwasher.  A DISHWASHER!  With the amount of entertaining I do, it’s far from a luxury, but it sure is an answer to prayer (thanks, Renee, for praying it into existence since last summer!)… 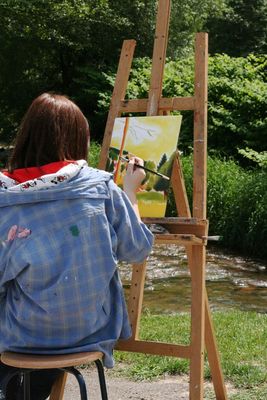 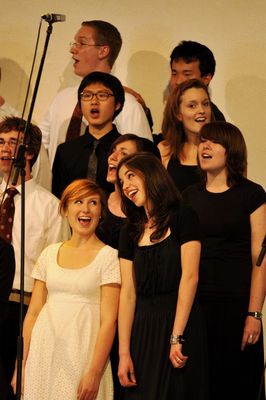