[Tagging seniors on this note, because you’re about to be newly minted college freshmen–see second half of note.] 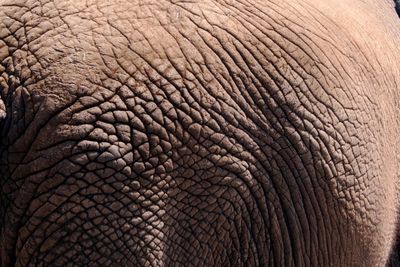 All photos from the school retreat in Nuremberg!

I’m feeling my age, these days.  Oh, it’s not brittle bones or arthritis.  It’s the elephant who rather unsubtly turned up last week.  I woke up one morning to find him sitting on my sinuses, while a cohort of similar girth had apparently taken up residence on my lungs.  I was sick, in other words, and not the cute kind of sick that sneezes demurely and coughs a melody.  No, this was an attack of gargantuan proportions, and Elephant and Co. have shown no sign of moving on.  The only sounds I’ve heard clearly in 7 days are dog whistles, and I’ve got to tell you that trying to direct a 50-voice choir while severely hearing-impaired is…challenging.  I’ve finally started asking the singers if they sound any good, and they’ve taken to answering my question with their usual clear signals: a half-hearted shrug and a request to go to the bathroom.  Not helpful. 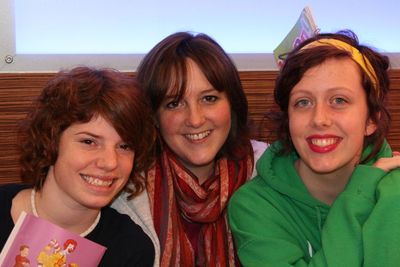 To make matters worse, I nearly burned my house down two days ago by leaving butter on the stove and not realizing it was on fire until my eyes started to water–I hadn’t smelled a thing, as my nose’s scent-receivers have apparently been scorched by the high core temperature that is either a raging fever or the world’s longest hot-flash.  My lungs are filled with marbles, my head is gripped in a merciless vise, my neck and shoulders have turned to stone, and this has been going on for over a week.  (It’s not really as bad as I like to make it sound—I might be taking some poetic license with Truth.  Except for Dumbo.  Dumbo’s real.  I heard him braying when I woke up.) 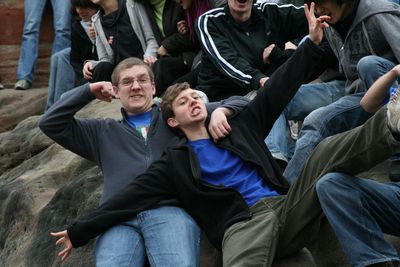 There have been other events in my life that have reminded me of my age lately.  Three weeks ago, when my mom was here for a short visit, we reconnected with a couple I hadn’t seen since I was 10.  Sonia and Heikki had met as students at the European Bible Institute where I grew up.  They eventually got married and now live in Switzerland.  I hero-worshiped Sonia, when I was little, and was convinced that growing up to be HER would be the best possible outcome for my life.  How wonderful to meet again as adults and revisit those years from this alternate perspective! 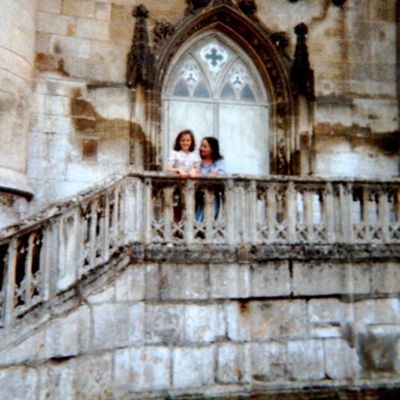 (With Sonia on the porch of my favorite teensy castle near Paris around 1978–and today.) 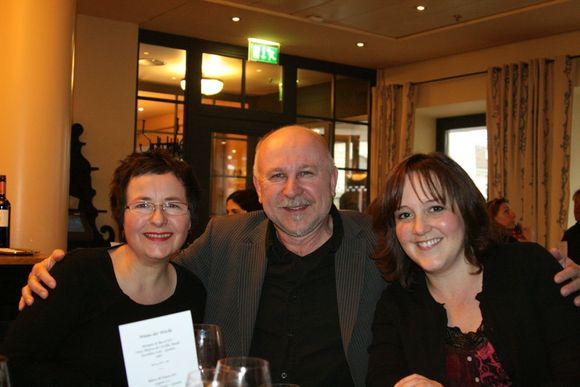 One week later, at Candlelight Dinner, I watched my former college roommate, Tammy (Stuart) Peters performing with the gospel choir.  She and I were friends at BFA during our high school years (and by “friends,” I mean that I desperately wanted to BE HER!), then went on to share a room for a semester at college.  Her husband, Phil, reminded us both after the concert of the loooong drive we took together from Wheaton to Winnipeg, Manitoba, back in 1987 (?), stopping along the way to siphon gas out of a pick-up truck in the middle of the night!  Thank goodness for North Dakota youth who still drag race down Main Street in the wee hours, under stunning Northing Lights…  Watching Tammy singing in the choir with her 17-year old daughter last week reminded me, once again, that life has definitely moved on! 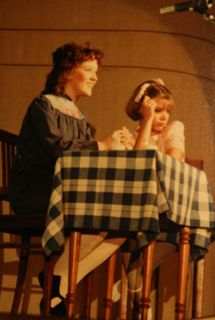 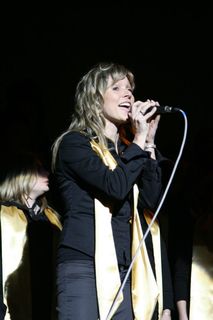 (Tammy and I in “I Remember Mama,” and Tammy at Candlelight Dinner)

And then I received two visits this week from former students.  Ellen graduated from BFA last year and is just finishing her first year at Wheaton.  I saw her in September when I made a frenzied tour of midwestern colleges between surgeries!  She is a deep-thinker and an energetic storyteller who isn’t afraid to dissect her experiences into sources of new knowledge and closeness to God.  And Liz (Lizzard) graduated nearly three years ago.  She is one of the most talented and luminous high school actresses I’ve ever known, and her Anne Frank remains the most powerful memory in my theatrical history. 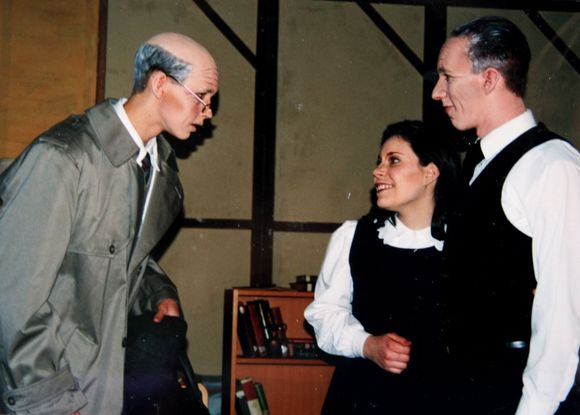 (Liz in “Diary of Anne Frank”)

There’s something…redemptive about “reunion conversations” with former students—though, again, they tend to hammer home the ravages of aging, particularly when one tries to hold them in a loud German restaurant while one’s ears are submerged in sound-resistant muck. The lack of daily contact over months and years forces reunion-topics away from the mundane and into more transcendent territory.  What a sobering and galvanizing thing it was to be able to spend time with each of these ladies on their short visits to BFA.  My talk with Liz focused on our need for wholeness—and wholeness, in the case of MKs, involves relational amputations, identity graphs and heart-home transplants that can leave us looking like existential versions of Frankenstein—a patchwork of places and losses and experiences and hardships and failures and victories and trivial knowledge that has a broad swath of geography as a background and long-lost relationships as golden threads. 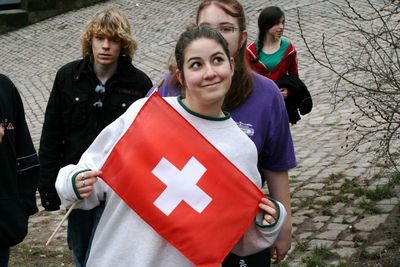 It’s easy for MKs to shy away from mentioning their complexity to North Americans.  Part of that is the result of a sort of resigned laziness (it would take too much effort to explain it adequately), part of it is fear (North Americans don’t have the framework to understand the MK life and might reject us for being too different), and part of it is self-preservation (it’s sometimes easier to forget who we were than to try to integrate that person with the North American College Freshman we’re becoming). 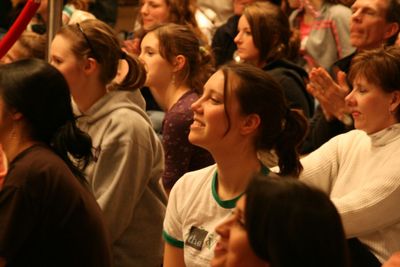 As Liz and I were talking about how best to express the harder, darker aspects of our identity to others, I tried to explain to her how God can use the rough patches of our lives to help others through theirs.  Even if our rough patches happened on other continents and immersed in other cultures!  She said something like, “But I don’t want my struggles to become my identity.”  Here’s the thing with struggles: if they remain our carefully guarded secret, they do seep into our identity and take on much more influence than they should.  But if we plow our way through them and then find the courage to retell our story from a survivor’s perspective, reframing it so the listener can relate in some way, that’s when it can become a redemptive tale of benefit to others.  Hiding or neglecting aspects of ourselves handicaps wholeness and hobbles intimacy.  It’s a high price to pay for misguided self-protection. 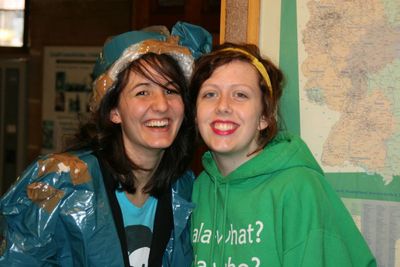 (An afterthought:  I’m not implying that MKs should only speak of their experiences if they feel that they’ve overcome their challenges.  Whether you have or not, it’s important for friends in your current world to know who you’ve been and where you’ve come from, even if you’re still not reconciled with some of it.  My suggestion is that you start by inserting some small details about your international life into conversation and gauge from your friends’ reaction how “safe” they are.  If they ask follow-up questions or show interest, give them a little more information–without deluging them with it.  Whatever the case, pursue friendships with peers who will want to know your full identity, but don’t be dismayed when you find some who don’t!  The wait will be worth it.) 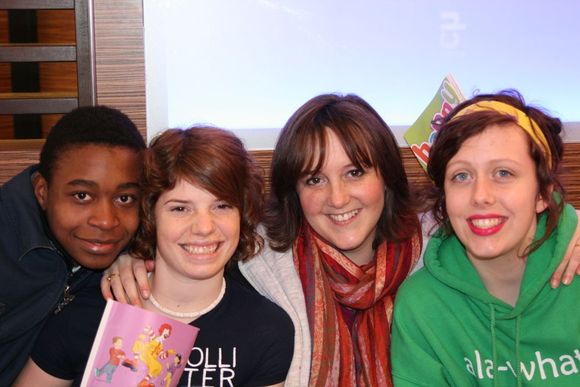 Liz cocked her head to the side and, in the small, sweet voice I’ve missed so much, asked, “But aren’t there some parts of your life you don’t talk about?”  I gave it some thought—which, in my current state, required some effort.  My honest answer was “no.”  I might be selective in the words and details I use, depending on the audience, and I certainly don’t volunteer personal information unless it’s warranted or asked for, but if the occasion arises when I can relate my story in the hope of educating, helping or merely connecting with others, I do.  Our lives—whether they’ve lasted 20 years or 40—will not be spared from struggles.  To me, the only way of making something of value, something redemptive, of those crippling or traumatizing events is to use them to reveal God’s character and the human spirit’s capacity for survival to others.  As I told Liz as we drove through the German countryside on a sunny morning yesterday, though our struggles don’t define us, our survival certainly can.  And what this world craves (as proven by Captain Sullenberger and his crew of modern-day heroes who landed on the Hudson several weeks ago) is stories of redemption told by overcomers whose human frailty was sublimated by divine intervention.

(These two have clearly been hanging around Jun too much!)

Feeling my age?  Yes.  And Dumbo’s large, sinus-crushing posterior isn’t helping.  But despite the congestion and aches and lack of oxygen to my lungs, I must admit to being pleased to BE my age, because my collection of Redemption Stories is proportional to my decades of life, and from my Sonia-worshiping childhood through my Tammy-envying youth, from my mostly-forgettable (and painful) college experiences to the medical drama of recent adulthood, God has shaped my pain into something that radiates HIS power, HIS comfort, HIS healing and HIS grace.  That, my friends, is the beauty of being the child of a God who has made of Redemption His highest priority. 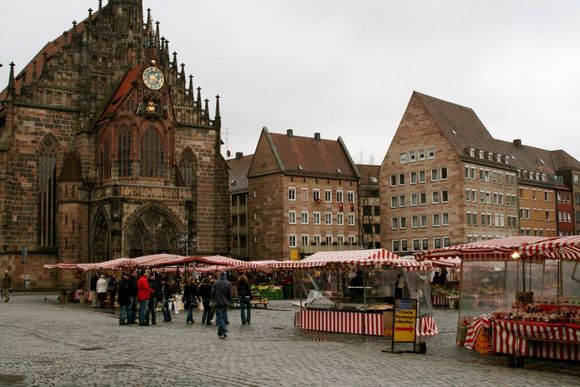 In other news, last weekend’s retreat in Nuremberg was a memorable one.  The weather was dreadful and the sleep was…sparse…but the conversations were well worth the long drive and short nights.  I was blessed with a small group of wise and honest ladies who challenged my thinking and moved me with their honesty.  Thank you, Helen, Kinsie and Christa! 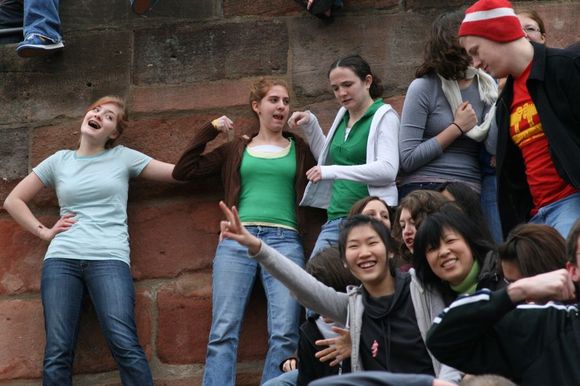 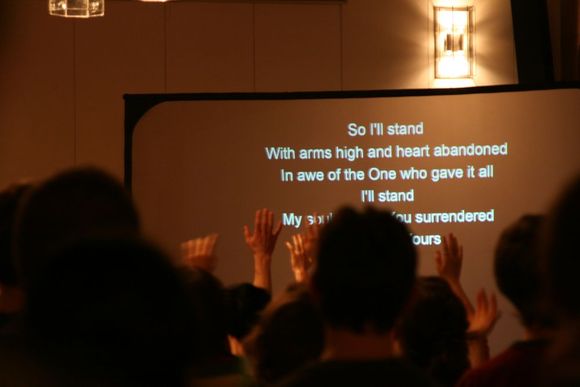 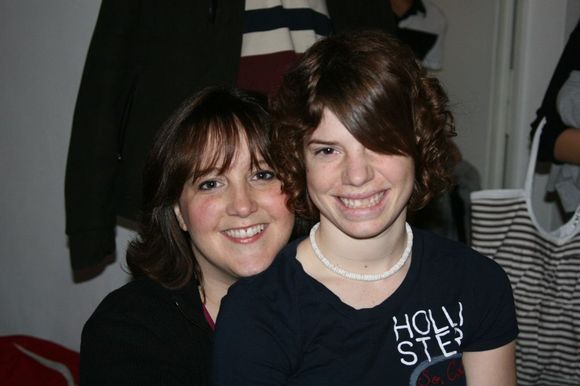 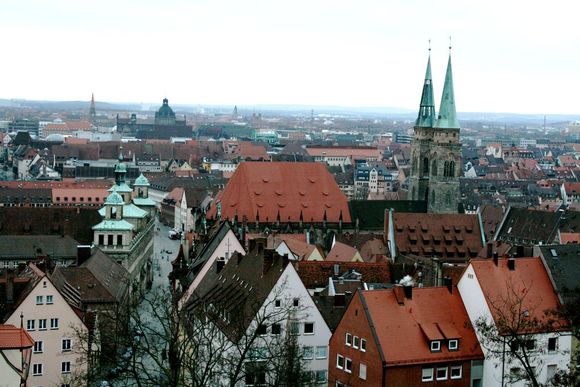 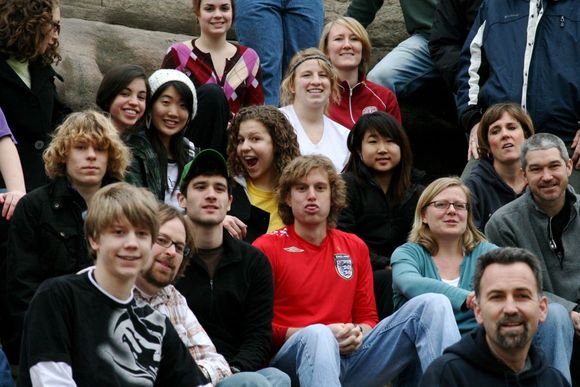