Side-note: yes, I will indeed be having surgery #4 (or #7, depending on how you’re counting) on Wednesday.  Please pray for my 10:45 wire insertion and my 2:30 lumpectomy/biopsy.  I’m not worried–haven’t been for any of the surgeries so far–but I’m getting a little weary of the whole thing!  I’m even going to try not to pass out during the first procedure this time!

OPERATION FREAK THE FRESHMEN!
It almost didn’t happen.  When I found out that I’d be sticking around this continent for a while longer than I usually do, I began to hatch a plan for a quick three-day blitz of midwestern colleges that a handful of my recent (and not so recent) students attend.  The plan very nearly failed when I found out that the hospital wanted me in Michigan a couple days before surgery for pre-op precedures!  I was…not happy…and half-heartedly made a couple phone calls.  I figured there was no way they’d be able to change their usual procedures just to acommodate my travel plans…  Two long days later (Wednesday), I found out that I’d be able to do all the pre-op stuff on the same day as surgery, which left me free to leave the very next day. 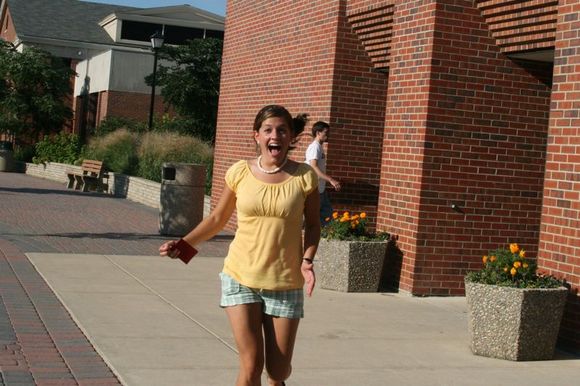 My first stop was Wheaton.  I’d told Meredith that I was coming, so she could help me to surprise Ellen.  As it turns out, it’s Ellen’s sister who set her up for the big jolt!  She was on her way to the Wheaton cafeteria when I stepped out from behind some landscaping and greeted her.  It wasn’t so much a double-take as a quintuple-take before she believed her eyes.

I’m pretty sure she caused irreparable damage to my right ear by screaming into it while she hugged–and hugged–me, but I was quite happy to sacrifice it for the cause! 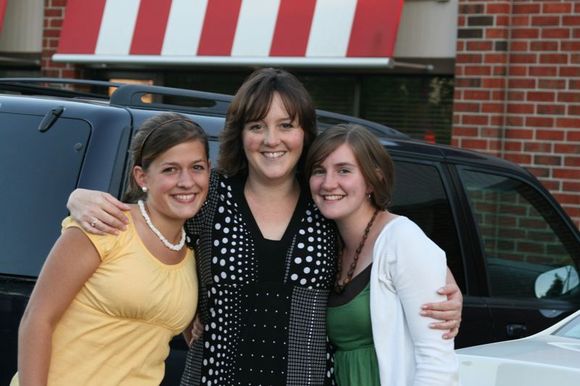 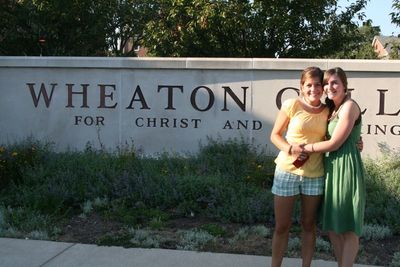 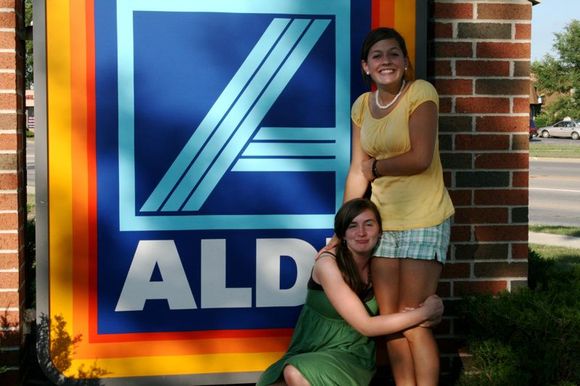 Aldi’s…a store we have in Germany…

Meredith joined us a few minutes later and we all went out for a wonderful evening together.

We capped off our hours of frantic catching up with a slow drive around the scenic streets of Wheaton, then sat in my car for a final time of prayer.  Truly, truly precious moments.  I love those girls so much…

The next day, it was off to Taylor University (Indiana) to surprise Lauren Wiest, who graduated three years ago.  Jesse (BFA class of ’07) was my accomplice this time, as well as all 23 of Lauren’s roomies.  Okay, maybe there weren’t 23 of them, but it sure felt like it!  The plan was to lure Lauren to a lunch at Ivanhoe’s (a local landmark) and have me join them there.  Problem is, this MK (me) forgot that there’s a time change between Illinois and Indiana, so the poor throngs of co-conspirators had been sitting in the sun trying desperately to pass time for a full hour before I showed up! 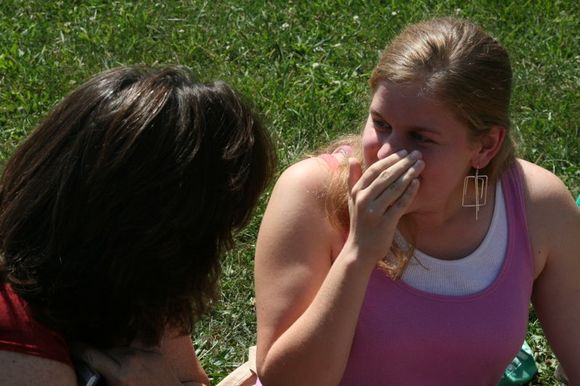 I came up behind Lauren and casually crouched next to her as she ate ice-cream on the grass outside the restaurant and said, “So is it any good?”  She was…stunned.  She stared.  Then she said, “What the heck are you doing here??”  Then stared some more.  I got a note from her yesterday informing me that she still hasn’t regained her mental equilibrium, so you might want to add her to your prayer list! 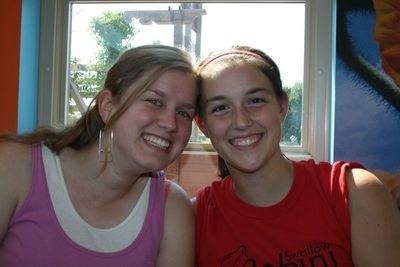 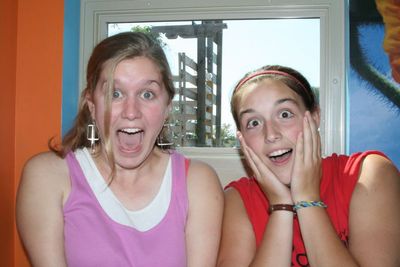 The way Lauren *should* have reacted to the surprise!

We dropped by Lauren’s apartment, then went off to Payne’s Cafe where I had a lovely spinach salad and, once again, engaged in the sport of speed-talking.  These are two amazing young ladies, and I’m so thrilled to have been able to spend some time with them! 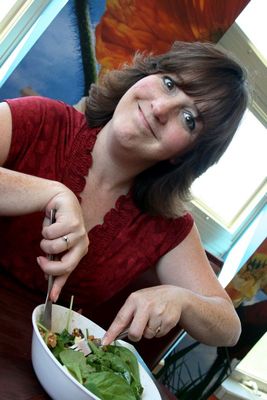 Sooo very excited about my spinach salad!  This healthyliving thing is for the birds…

After a quick tour of the campus, I was back on the road heading to Anderson, Indiana, to surprise the Young family.  Michelle is one of my closest friends and Jackson (her son) has been a thorn in my side and one of the great joys of my teaching experience for a while!

In the days before my trip began, his sister passed messages to his father (Lane) for me, which allowed me to surprise both Jackson and Michelle. 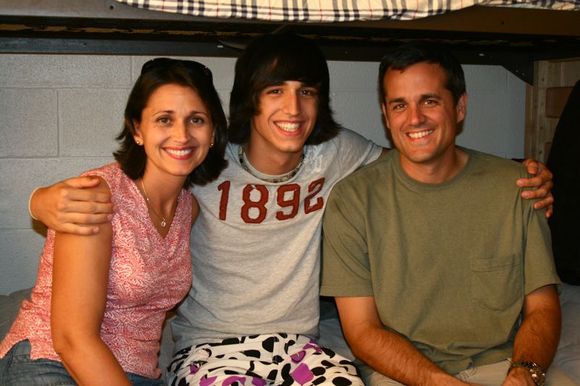 I was lying in wait at their motel when Lane and Michelle came back from an errand.  It just so happened that my room was across from theirs, so I was able, once again, to casually greet Michelle as she was opening her door. So–much–fun.  We haven’t seen each other since May…and a LOT has happened in both our lives since then, so we had an awful lot to talk about.  We spent that evening together and waited until morning to spring the last surprise of my trip on the unsuspecting Jackson.

He walked out of his dorm to join his parents for lunch, and didn’t miss a beat when he saw me standing there! 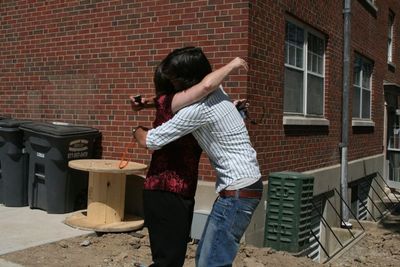 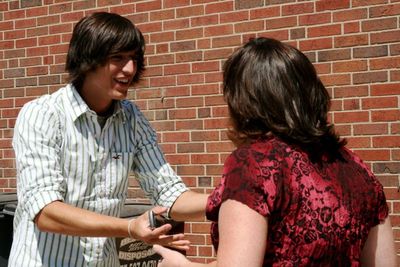 I wasn’t able to spend much time with Jackson because he was still neck-deep in first-days-of-college stuff and saying goodbye to his parents, but it was still great to visit his dorm room and see him in his new world. 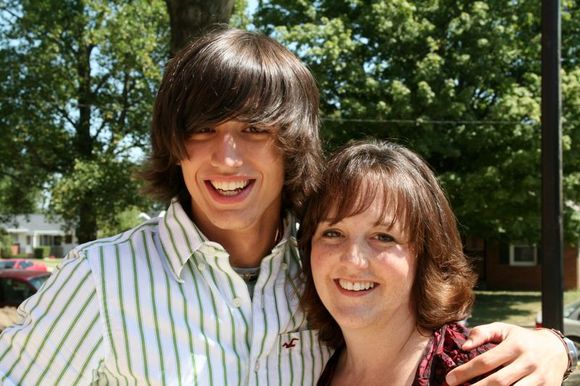 His roomie (Daweed) found this toilet on the side of the road and decided to give it to Jiggles (right).  Don’t ask.  And this wasn’t a nice clean new toilet.  Nooooo.  This was a very well used and very poorly cleaned toilet.  And there it was sitting in the middle of a dorm room.  My general opinion?  Ew. 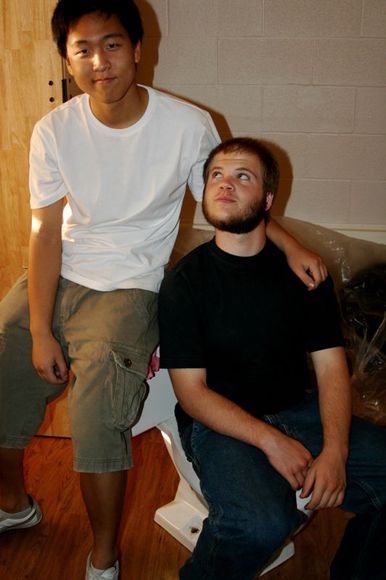 Sitting on the infamous toilet.  Jiggles is going to turn it
into a planter… 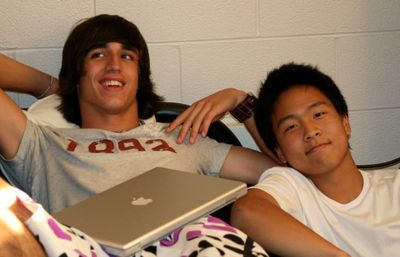 This evening, I am back in Wheaton before heading to Detroit in the morning in anticipation of my Wednesday surgery.  To be honest, there were some decidedly selfish motivations in making this trip.  Yes, I wanted to see my students and talk with them about the challenges of transition and the realities of life beyond BFA.  But I also desperately needed to feel connected again, and face to face, with some of the people who have been my life for so many years.  After a summer spent in an uncomfortable limbo between hospital visits and aborted plans, this reuniting was a welcome reprieve.  I am so grateful that God worked it out for me.

He worked another minor detail out too.  On my first trip through Wheaton, I stayed in absolutely, positively undeniably the most seedy motel known to man.  “Ew” doesn’t begin to describe it.  Tired as I am (and with an eye-infection bothering me), I didn’t think I could face the filthy bathroom, thread-bare carpet, stained sheets, or creaky walls/ceilings again.  Neither did I have the energy to placate the rude Pakistani manager or force laughter at his assistant’s unfunny jokes…  So I got brave and walked into a newly built motel I’d seen on a previous visit.  I asked the manager what the hotel’s cheapest room cost, and he quoted a price well outside my price-range.  I told him that I had exactly $60 left and turned to go…and he called me back and gave me one of the most beautiful rooms I’ve ever seen for exactly that amount.  Can you believe it??  I had to tear myself away to go out and run errands!

With the lack of sleep of recent days, this room is God’s special “wink” to me (as the French would say). 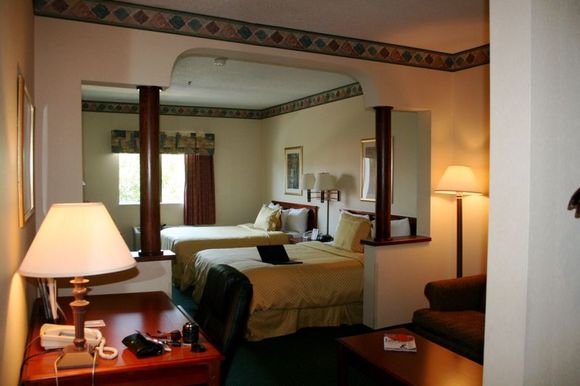 It is now exhausted (!) but joyful that I await Wednesday’s surgery.  And sobered too.  Having witnessed first-hand the tearing-apart endured by Lane and Michelle as they left their son in Indiana and took off this morning to return to Germany, I am reminded afresh of the sometimes painful commitment the mission field requires.  Their sorrow reminded me of my own heart-sick pain when I began college, and of the pain my parents must have experienced when they left me in Wheaton for the first time.  We need to be praying ceaselessly for BFA’s students as they enter or reenter college as well as for their parents.  These are trying days for them–exhilarating too, for those who are certain that they’ve chosen the right school and are embarking on the best years of their lives.  But it won’t always be easy, and your prayers might help to make the transition smoother.

If you missed it last time, please go to this Youtube video to get a clearer glimpse into this monumental transition in the life of BFA’s MKs.  https://www.youtube.com/watch?v=EBXth2N_N3c

I’m grateful for your prayers for me too, as I head to the hospital again on Wednesday… 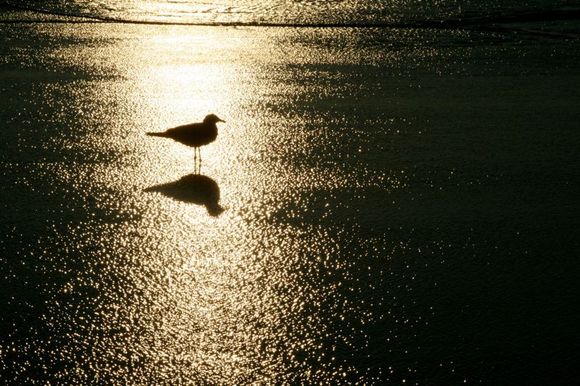 “You will keep him in perfect peace, whose mind is stayed on You, because he trusts in You.”
Comments
Post Views: 167