(Reading on Facebook?  Please, please, please click here to read this entry as it should be: http://www.xanga.com/serenitymine)

I have a new friend.  His name is Mac.  When I first heard that he was coming for a visit—no, had already come—I instinctively despised him.  There were three major reasons for my instant hatred:

1.  I felt too young to have him as a friend.
2.  He scared me—I’m used to friends who are complex, but somehow discernable and whose existence isn’t focused on harming me.
3.  I had a really important blog entry planned, and I wanted to write it next.  Oh, well…

It’s all irrelevant now.  Mac showed up.  He seized my world with morbid hands and shook it until every particle of the “expected” and “predictable” was jarred from its anchor and drifting, frightening and uncomfortable, where certainties were blurred and light was hindered by opaque uneasiness.

I’d been worried that the surgery on my facial cyst would leave a scar.  What it left, instead, was a cancer diagnosis. 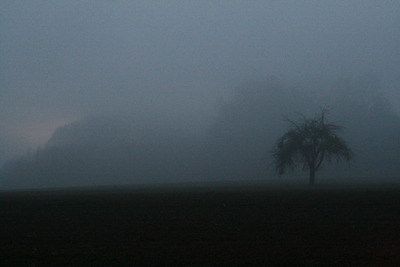 The pictures of mine that I included in my last post were prophetic, somehow.  And I hope you’ll forgive me for including some of them here again…they so clearly express the phases of this budding and reluctant relationship with Mac.  My first encounter with him came on New Year’s Eve—in the mail—in German—and left me weak-kneed.  All I knew at that point was Mac’s name:  Microcystic Adnexal Carcinoma.  Now, I’m not much for judging people by first impressions, so I immediately set out to learn more about this Mac whose friendship would be a lifelong affair.  The terminology I found in my search was disquieting:

– rare
– aggressive
– invasive and extensive
– resistant to standard treatment
– cancer of the sweat duct (ironic in a woman who has spent the better part of her life avoiding sweat at all costs!)

I finally saw my doctor yesterday.  In his best, German-laced English, he said, “This is a problem.”  Put an ominous Colonel Klink accent on those words and you’ll double their effectiveness.  He’s consulting with a specialist and will get back to me next week.  More tests in Freiburg might be required.  Mac is so rare that there’s relatively little research available.  Treatments and outcomes are far from predictable. 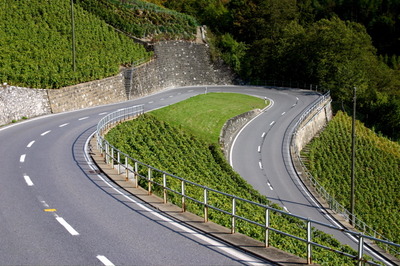 (My view of life, right now, feels a little like this hairpin curve…)

There was something a little ironic about the timing of this diagnosis.  I came on the eve of a new year, a week before the anniversary of my dad’s death from leukemia, less than a month from my 40th birthday (which I’ve been saying all along isn’t the beginning of an end, but the launching of phase 2 of this incredible life), and in the final weeks of my grandmother’s long (ie. LONG) life.  Enter Mac: and “40-years old” suddenly felt incredibly young, my dad’s 65 years appeared astoundingly short, and my grandmother’s 94 years seemed downright miraculous.  It’s not that I was contemplating any immediate demise—optimism is a much better friend than Mac will ever be and I plan to hold it closest to my heart.  But I’m an optimistic realist, and though the final medical verdict on “life with Mac” is still pending, I choose to enter this relationship clear-eyed and determined.  (I’ve known enough dysfunction in my life to realize the importance of keeping this friendship above-board and honest!)  And besides, I probably statistically stand a higher chance of dying in my car on the way to school than of succumbing to Mac.  You never know when a rogue German tractor is going to come leaping out of a field into the path of my slightly-speeding (always) Astra!

With so much I didn’t know about Mac, I found comfort, in those early hours with him, in making a list of what I DO know.  There was comfort in the certainty:

It’s that last one that gave me pause, both on the day I received the lab report and in the hours following my visit with the doctor yesterday.  God was (is) here.  It is His hand I’ve felt on my back, warmed by late-day sun.  It is His peace in my mind, soothed and unraveled by His answer to my prayer.  It is His promise in my chest, loosening the stranglehold, with every deep breath, of that oppressive opaque uneasiness.  He was the faint light growing deeper; the warm colors of beginnings, not the heavy cold hues of endings. 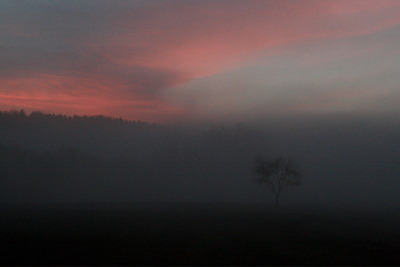 My dear friend Mari Ellen, who has known my idiosyncrasies forever, was the first to point out what I’ve spent the last twenty years repeating and somehow didn’t acknowledge when Mac first came to town.  Ever since my late teens, I’ve been compiling a “tumor list”—a list of all the things I would begin to do the moment I discovered that I was seriously ill.  When I mentioned it to others, they mostly rolled their eyes and called me morbid.  The more pragmatic of my friends asked if I wouldn’t rather start on the list when I was well enough to enjoy it rather than wait for the waning of my life.  Whatever.  I liked my tumor list…mostly because it was my promise to myself that I would some day see Australia, swim with dolphins, discover a wild edelweiss, sit on a movie set, work in an orphanage, put a couple former students through college, take ballroom dancing lessons (anyone know where I can hire a dancing partner??), build a REAL theater at BFA, and meet George Clooney (I sure hope I’m on his tumor list too, or that one might be seriously compromised).  The list goes on and on…

I spent a while contemplating my tumor list last night and, as I did, I had two revelations.

– Although Mac is aggressive and invasive, I recognized him early…thank God for the vanity that sent me to the doctor in the first place.  Mac hasn’t even begun to wear me down (unlike some of my other friends…just kidding), and my life is nowhere near the end-stage where tumor lists become vital, last-ditch attempts to seize what is already mostly dead.

The items on my Tumor List that matter the most to me are insignificant compared to those on my Life List.  And the ones on my Life List don’t require flights or funds or fantasy.  Ever since childhood, as far back as I can remember, my Life List has been simple:  to do for others, to love and be loved, to find serenity.

If there’s one thing Mac has done, and done convincingly, it’s show me that my Life List is not something waiting to be started for whatever morbid reason.  My Life List is finding its fruition in every day I breathe.

It is being granted …
in every phone call with my sensitive, loving, still-growing mom
in every email from my niece and nephews
in every glimpse of the Swiss alps
in every introspective Creative Writing class experience
in every prayer time with Renee
in every decadent, friendship-saturated meal with Mari Ellen
in every hanging-from-the-rafters hour of insanity at the House of Young-and-Maggie
in every hug in the school hallway
in every chaotic choir practice
in every croissant from a French bakery
in every picture I take that turns out just right
in every wedding I get to witness
in every hour of uninterrupted sleep
in every pan of Storch cinnamon rolls
in every nonsensical Star Academy evening
in every Tuesday/Thursday Krunk time
in every walk in the Riedlingen hills
in every support check I receive from strangers and friends
in every note from a student
in every random statement from Erin (“It would be weird to have eight people orbiting around you”)
in every philosophical analysis of Grey’s with Ahram
in every profound and world-shifting realization by Squirt (she’s brilliant and intuitive!)
in every Candlelight rehearsal
in every Maggie-time or miscellaneous animal-therapy
in every gathering in my bursting-at-the-seams apartment
in every fatty-yummy McDonald’s burger
in every batch of snicker doodles for Ariel
in every BFCF worship time
in every visit I have with a baby
in every clean-up from destructive house-guests
in every reunion with my heart-city, Paris
in every cheesy old episode of Fame
in every re-engaging with old friends like Tifah, Frank and Gray
in every morning wakeup call
in every pijama’d evening email-writing session
in every moment of amazement
in every instance of dissipating fear
in every breath
in every breath
in every breath

My Tumor List might have waited for Mac, but my Life List hasn’t.  And while I wasn’t looking, while I was still living with the illusion of total health and planning for my 40s without the slightest notion of cancer, it had started fulfilling itself all on its own, fueled by love and God’s steady, warm-handed guidance.  As I await the final verdict on Mac and his invasion of my future, all I can do is accept that he and I will be spending some quality years together.  And that’s okay.  I’m not saying that it will be easy if Mac takes his worst possible course.  But it will be okay.  Because I am a miracle.  Because God has made promises that transcend our physical experience.  Because my life is already—already—filled with doing for others, loving and being loved, and unfathomable serenity.

Here’s to Mac and the lessons yet to learn…  Aggressive?  Invasive?  Malignant?  Sure.  But “What lies behind us and what lies before us are tiny matters compared to what lies within us” (Ralph Waldo Emerson) and “Thou wilt keep him in perfect peace whose mind is stayed on Thee…” (Isaiah 26:3)