It began as all adventures do: with the requisite preparations and the expected mass hysteria. 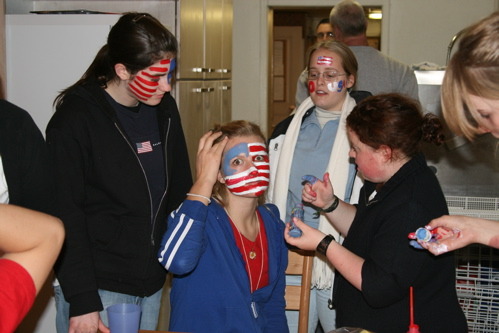 The school (not all of it—just its most noisy elements) was headed to Basel to watch the US team taking on Switzerland in soccer. I nearly stayed home—mostly because people had signed up for seating in neat little groups and I found myself groupless. But I went anyway and didn’t regret it!

I thought my evening might have been doomed when I arrived at the stadium with a car-load of painted ladies only to realize that I had removed my ticket from my camera bag back home in Riedlingen. I was now groupless AND ticketless.. But I decided to persevere and went to stand in the ticket-sales line in the hope there might still be one available. A kind Swiss man with a friendly smile saw me standing in line and came up to me holding out a ticket. I told him that I’d love to buy it from him, but my cash was in the car…and he said, in Swiss German, “Just take it. It’s yours.” And off I went with a big goofy smile on my face! 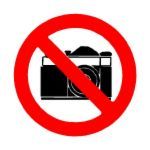 Trauma number two came quickly. The security people informed me that I couldn’t take my camera into the stadium. EXCUSE ME?? Unless you have experience arguing with Swiss security guards, I highly recommend that you refrain from ever attempting it. I tried out my entire arsenal of pleading, to no avail. So off I went to check my camera (ouch) before climbing into the nose-bleed section of the bleachers: last row, dizzyingly high, disappointingly quiet.

I was now groupless, ticketless, cameraless and cheeringless. One more “less” and I might have needed an Valium. I remedied one of the “lesses” fairly quickly by finding an empty seat in a MUCH rowdier section (right behind the Sonne morons—term of endearment), which made my heart crinkle with happiness.

But how was I supposed to immortalize the evening without my camera in hand? I despaired…and then I remembered that I’d scheduled my VCR to tape the game on Swiss TV. And it’s because of that brilliant (thank you very much) move that I can share with you the following pictures! Pardon the lack of clarity—taking photos of a television screen isn’t conducive to great resolution…but isn’t it fun that we made it into so much national coverage? I guess that much patriotic “uncoverage” (ie. partial nudity) pays off. 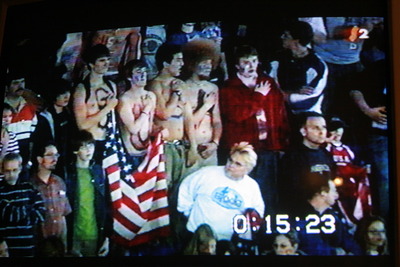 The national anthem began and, as the Swiss are foreign to the whole concept of patriotism, none of the organizers had apparently planned on having flags displayed for the players to turn to. The players looked around in confusion: 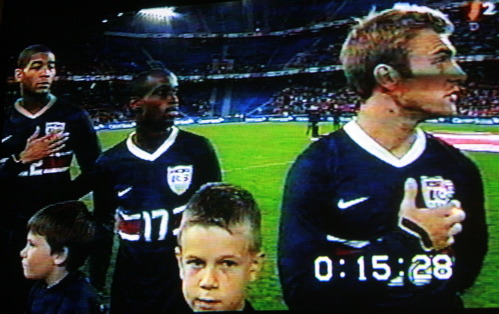 They had no idea what to do and just kind of rotated, looking for “the flag”…


Then one of them spotted the three million five hundred and twenty five thousand flags we were holding at our end of the field. (Mild exaggeration…) He pointed them out to his colleagues: 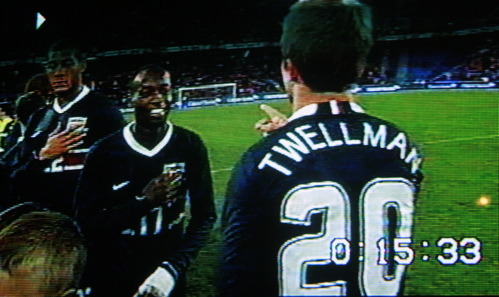 And they all turned toward our section of the bleachers (we’re so proud) to sing the national anthem. All together now:  Aww… 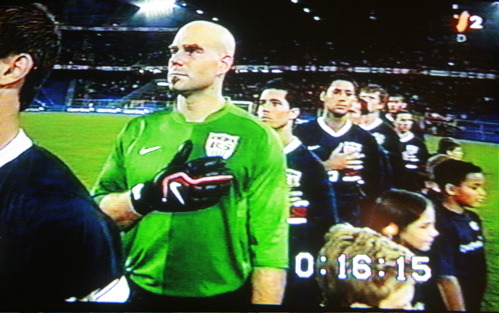 I must say that our student’s zeal as United States fans was a tad tinted by their inability to sing the national anthem without making up some lyrics and leaving out entire sections. Oh well. Their hearts were in the right place—even though some of their hands were covering the wrong side of their chests. 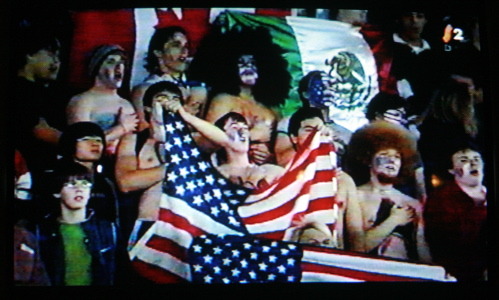 The fabulous evening on TV was interspersed with great shots of the BFA crowd being…well…BFAish. Some of our MKs, quite confused by the whole nationality thing, brought flags from other countries to wave. They were confiscated by security, to be retrieved later. 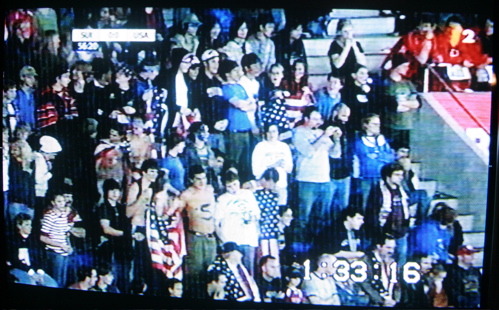 BUT here’s the important part: WE WON. The only goal of the evening came 8 minutes from the end of the game, and though it owed more to dumb luck than to athletic genius, it clinched the game!

And it’s with happy hearts, weary bodies and exploded vocal chords that BFA’s cheerers headed home from an historic and memorable evening. 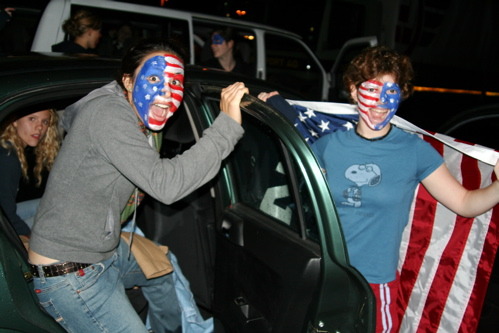 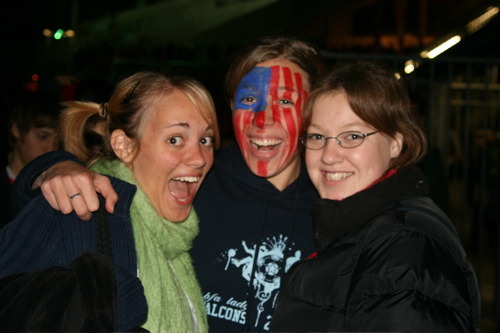