(If you’re reading this on Facebook, please click on the following link in order to see it correctly!  http://www.xanga.com/serenitymine)

Humiliation, it turns out, is not a fatal condition.  It may cause hives and intermittent intestinal discomfort, and it may even lead to post-adrenaline binging on addictive substances like…you know…cereal and Canadian honey (I’m a bit weird that way), but it’s most definitely survivable.  The reason I know?  Fall Party.

It started back in 1976 when a disembodied voice on TV for the first time uttered these words:

“Once upon a time, there were three little girls who went to the police academy. They were each assigned very hazardous duties, but I took them all away from all that and now they work for me. My name is Charlie.”

Charlie–as in “Charlie’s Angels.”  And when the off-screen actor first spoke those words, he ushered in a trio of women who looked something like this and became a cultural phenomenon: 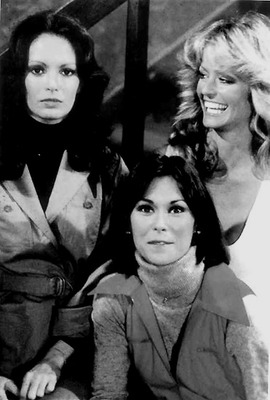 Thanks to the wonders of YouTube, Charlie said his famous lines again last night during BFA’s fall party, only this time he wasn’t introducing Farrah Fawcett, Jaclyn Smith and Kate Jackson.  He was introducing…well…let’s call them Charlie’s Geriatric Angels. 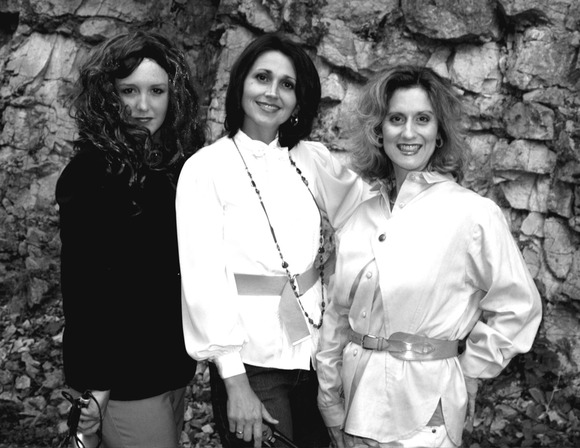 It’s a stretch (trust me, I know–my borrowed pants and too tight blazer reminded me all night of what a STRETCH it was), but here I am, with two of my more demented friends, trying to revive the ground-breaking series.  NOTE:  Although Renee and Michelle did achieve a more-than-passing resemblance with their Sabrina and Jill counterparts, I am fully aware than my Kelly is…ahem…less than accurate.  BUT I’d been deprived during my entire childhood of playing her part because there was always a cuter, thinner, funner and all-around perfecter girl than me to be Kelly, and by golly, I GOT TO BE HER last night!  That’s right, Sylvie, Sara, Heather and Christine!!  Me!!!  I got to play Kelly!  (Good thing I’m not bitter about past offenses…  We missionaries are fabulous at the forgiving and forgetting thing, aren’t we?

Sadly enough, BFA’s culturally illiterate students, even with our video introduction, remained confused as to our exact identity, which might be due to our stunning lack of resemblance with Hollywood’s latest (and inferior!) angelic incarnations:  Drew Barrymore, Lucy Liu and Cameron Diaz.  Hey, there’s only so much a truck-load of makeup and a tacky wig can do!

BFA’s fall party is always a fascinating occasion, as it brings out the eccentric and creative in the most unexpected students.  A small sampling of the TV shows and movies represented last night: 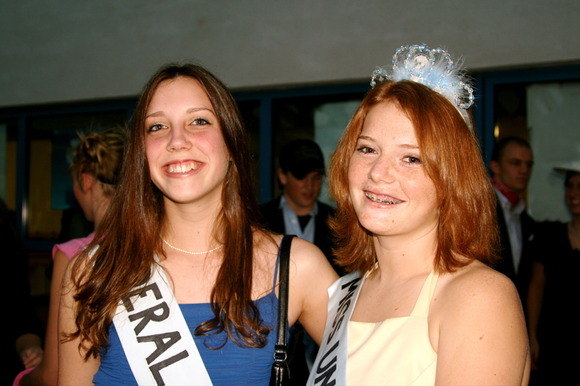 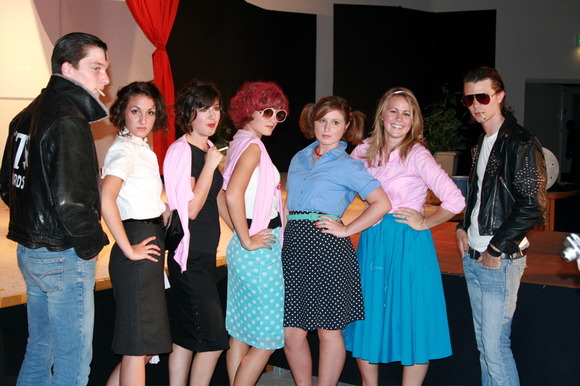 The cast from “Grease”…and the guy’s hair lived up to the title beautifully.
I found Hannah particularly stunning in her glamor-getup! 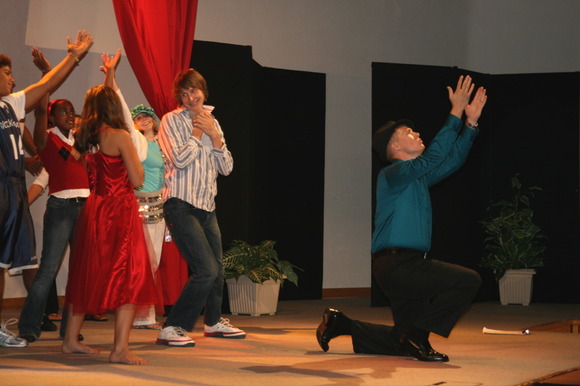 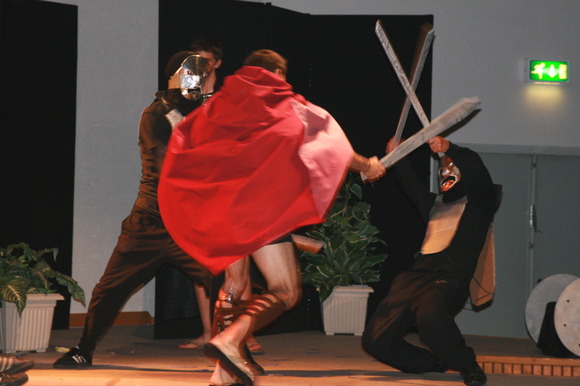 Bad guys and good guys from the movie “300” were on hand for some fancy sword fights, displaying even fancier abs and biceps!  I wonder how all of them managed NOT to hear that bare chests were forbidden for the evening…?!  It was grand fun–in a testosterone-crazed kind of way!

The evening also featured some games, most of which were fairly innocuous.  But one game in particular nearly landed (and I do mean “landed”) BFA’s mascot, Greenie, in a wheel chair.  The point was for him to leap into the air (in a skirt) and land on a cushion, “blowing out” a line of tealights (set up on the other side of the cushion) with the air he and his skirt would displace. 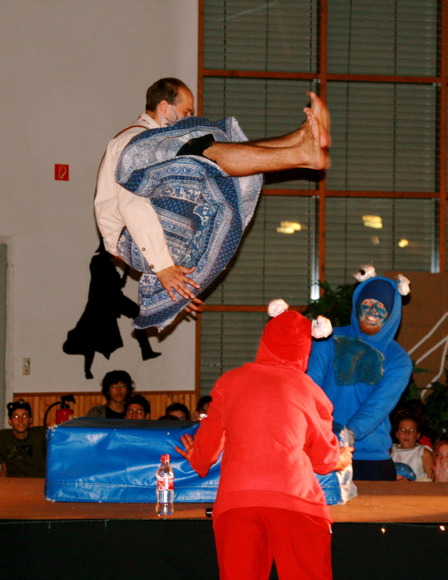 Well, those of you who know Greenie will agree that he isn’t exactly known for understatement and restraint.  He took a leap so gigantic and so…well…exuberant that he completely overshot the cushion and landed with his hind-quarters directly ON the row of tealights, on the hard stage!  (Note the expression of prophetic pain on Austin’s face as he holds the mattress and realizes that Greenie is in for a painful landing…)  There was a loud gasp from the crowd, followed by mass groaning and other inarticulate sounds of sympathy for the jumper who would spend the rest of the night with an ice-pack pressed to his fanny!  Please note the fabulousness of the action shot above! 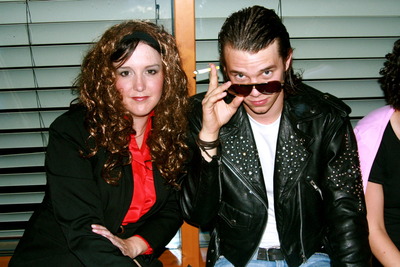 It’s not too surprising, is it, that the tamest of the angels, wanted her picture taken with the resident “bad boy”?  I told Merritt he looked WAY too comfortable with a fake cigarette dangling from his lips. 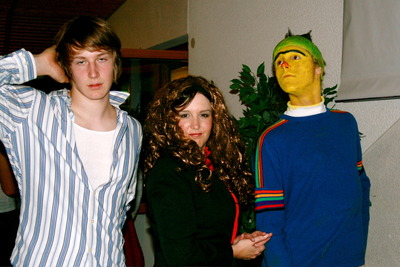 By the way, MANY of the students didn’t recognize me until I’d actually spoken to them for a bit.  When Kristoff (aka. Bert…as in Bert and Ernie, with Collin, trying to look suave) heard my voice coming out from underneath my hideous wig, his eyes got big as ostrich eggs and he squawked [insert cracking voice], “Miss PHOENIX??”

I’m pretty sure there were a l
ot of conversations on the way home that went something like this:

I blame my sanguine friends, whose hairbrained (no pun intended) idea made me cringe, but whose boundless excitement made me do what no Michele Phoenix (in her right mind) would ever do.  And I’m not just talking about getting up on stage and striking a pose (to the general “huh?” of our history-deficient audience).  I’m talking about borrowing a wig than has been, for years, the plaything of Maugenhard boys.  Oh, if that wig could speak!  Then again, I should probably be glad it can’t.  But I did pick a couple pieces of straw out of it, and that makes me a tad suspicious. 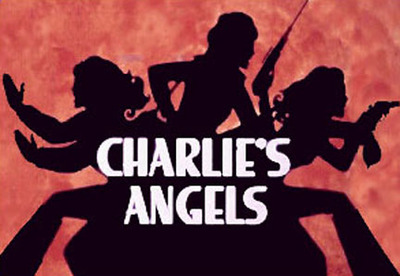 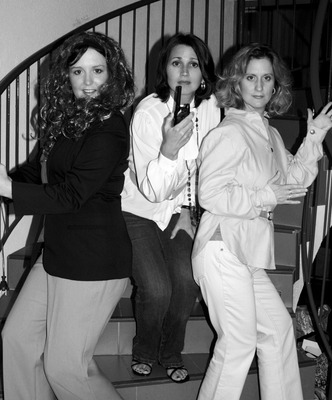 So here’s to my sanguine 80s friends–may we all live long enough to outlive this indignity.  You are Shelby to my M’Lynn, Hawkeye to my Hunnicut, Seinfeld to my George and Tigger to my Pooh (as in teddy-bear, not doodoo!).  And I’m grateful for you!

Now where can I buy disinfectant?  I need to fumigate my hair…