There have always been students in my life who have been—how shall I put this?  Challenging.  That’s a polite word for it.  These students have been blessedly few, mind you, but the occasional thorn-in-the-flesh has been God’s instrument to remind me of how very human I really am.

Few students have performed this duty better than a young man named Grayson.  I first came to know him (and by “know”, I mean “despise”…please read on before judging) when he was in 7th grade and I was the poor, too-dumb-to-say-no soul on which the school imposed a double-whammy role of Junior High choir director and Junior High French teacher.  Had I known what I was getting into, I might have done something preemptive like, say, introducing my brain to a bullet before the first day of classes.  Or maybe introducing my body to a dive off a tall structure spanning a body of water.  But, as any number of you reading this will attest, ignorance is bliss.  So I launched into my brief but memorable Junior High teacher phase with nary a qualm.  How bad could it be, after all? 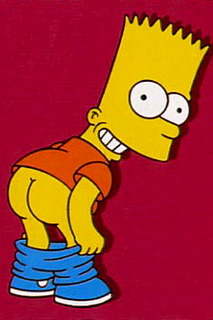 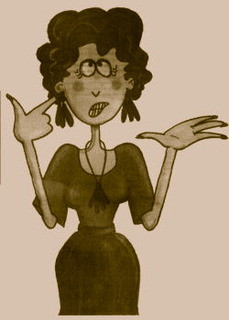 My apologies for the Bart pic, but I figure a cartoon is less offensive
than the real deal…not that I have pics of Grayson in that condition!
It just accurately captures the boy’s general obnoxiousness…

It could be BAD.  That’s bad with a capital B and a capital A and a capital D.  Let’s throw in some red for good measure too.  BAD, as in “I would rather have to run a three-legged marathon shackled to Marilyn Manson over burning coals and broken glass and slugs than step into that Junior High classroom again”.  Really bad, in other words.

I had Grayson for one hour a day, every day of the week—which means he had a detention with the maintenance department after school for one hour a day, every day of the week.  I spent the months of our all-out war trying to figure out who I despised most: the smart-alec (again, that’s the polite version) kid whose attitude and misbehavior made me have fantasies about juvenile detention centers, or me—the teacher whose grip on sanity was slipping hourly, never to be fully regained again, and whose love of teaching ended about 1.2 seconds after I entered his 7th grade classroom.  Never—and I do mean NEVER—has anyone been able to make me reach the levels of frustration and fury this young man brought out in me.  He made Bart Simpson look like an altar boy and had an uncanny ability to make me go from the “I’m a good little missionary” version of me to the “One Flew Over the Cuckoo’s Nest” version of me with one well-aimed, snarky comment.

But I digress!  God is very adept at proving to us that good can come from bad.  Rainbows come from rain, weight-loss comes from tapeworms, and supplies of Valium come from excruciating pain.  AND…friendship can come from the trauma of surviving (minus a few tufts of hair) the horrendousness of having Grayson as a student.  He grew up.  He lived long enough to make it to high school.  He joined my choir and the cast of two plays.  He toured with a French choir I directed for a month after his graduation.  And somewhere along the way—the tapeworm became a rainbow.  That’s a bit of a metaphor smorgasbord, but it’s an apt summary of the process.  In short, Grayson became a dear friend.

Why, you might ask, am I submitting you loyal leaders to this story?  Because the aforementioned doorknob prompted me to do some fairly serious thinking lately.  I say “doorknob” like I say “moron”.  It’s a term of endearment…sorta.  He told me about a trip he and his wife (bless her saintly soul!) took during the holidays.  They went to California and saw the Rose Parade.  According to my former nemesis, the really interesting part of the parade came only after the official floats had passed.  In their wake came the Christian militias.  And the Rabid Community of Misguided Evangelicals carried signs like these: 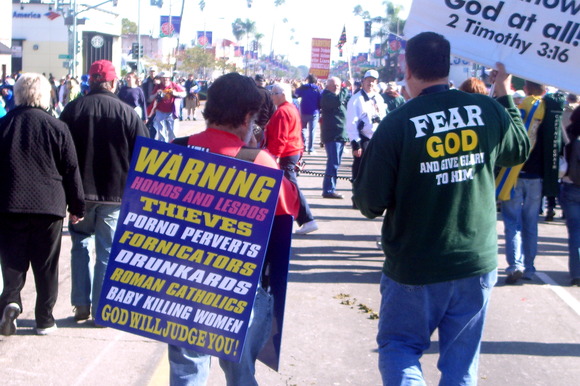 If you were an unsaved person watching these banner-toting Christians walk by with threatening messages for you, how would you react?  These evangelistic zealots apparently accompanied their religious procession with shouts of “God hates sinners”.  Much as I believe that God hates thievery or fornication or perversion, I know (because He has proven it!) that He absolutely, with all His heart, LOVES thieves, fornicators, and perverts.  But even if the marchers had been yelling a more accurate, “God hates sin!”, they still would have been sending a dangerous mis-message.  Because to a crowd of people to whom their sin, in many ways, is their identity, it would have been tantamount to saying, “God hates you”…which He absolutely does not.  Without watering down the Truth, it is critical, in this sensitive day and age when only the few get to be heard, that we speak Truth in such a way that doesn’t send the utterly needy fleeing from Christianity with shouts of “They and their God hate us!!”

We’ve all seen the WWJD bracelets people wear.  Well, let’s try WWJC.  What Would Jesus Carry?  Much as I try to wrap my mind around a vision of Jesus carrying a signthat reads, “Gays and lesbos are going to hell”, I simply can’t imagine it.  Instead, I envision a sign, lit from the interior with a warm, mysterious glow, that would say something like:  “Come to me because I love you .”  Is God’s wrath a Biblical reality?  Absolutely.  So are the consequences of sin.  But did Jesus focus on bludgeoning those he met with a fear of impending doom?  Absolutely not!  He focused instead on loving them in tangible and meaningful ways.  The prostitutes, the thieves, the adulterers, the perverts, the drunkards, the homosexuals and people just as warped and flawed as me.  (BTW:  Notice how the sign pictured above lumps Roman Catholics in with the rest of the “sinners”…) 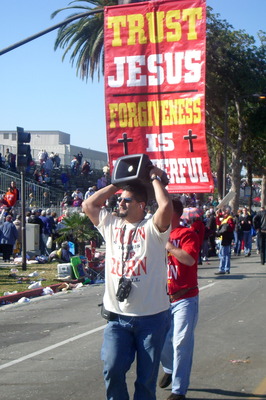 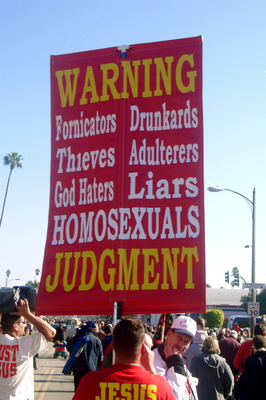 The guy in white got it almost right, but his t-shirt reads “Turn or Burn”

I’m reminded of a pastor I know who talked about a young couple that had recently been saved and joined his church.  They were unmarried (our banner-makers would say “fornicators”!) and had been living together for some time.  The pastor, in his wisdom and compassion, didn’t immediately hit them over the head with his Bible and order them to repent and get married.  He concentrated instead on loving them into a deeper understanding of God and of Christ, trusting the Holy Spirit to do His work when they reached a point where they would be receptive.  And guess what?  After a few months of this pastor loving them and teaching them and nurturing them, both members of the couple approached him to ask if they were living in sin, because they’d begun to feel g
uilty about it.  The pastor had given these “sinners” the tools they needed to understand their loving God better, and faced with His holiness, they had seen the Truth about a living situation that had, until then, been absolutely normal and acceptable to them.  He had loved them into God’s arms.

Isn’t this the banner we should carry?  A banner of love and gentle prodding and serving?  I hope so—it’s the one I try to hold high.  Are there exceptions to this?  Absolutely—just as there were in Jesus’ dealings with some of the people He met.  But He had the mind of God, and we don’t, so His instincts were probably a tad better than ours!  My point is that if we live out our Christianity with love, if we love the most unlovable of God’s creatures because they are so valuable and precious as His own creations, if we are capable of seeing the beauty in them from God’s perspective…only then will we be able, like Jesus, to form relationships that lead to the Kingdom.  I believe that in a vast majority of cases, our right to pass judgment on others must be earned, and not usurped.  Until then, we are commanded to love. 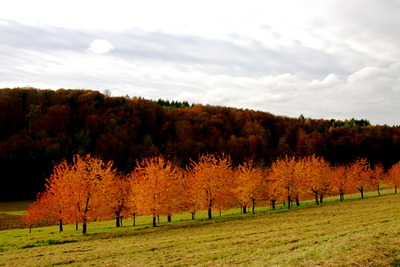 The man in green on the top picture has “Give glory to him” emblazoned on his shirt.  I’m not sure that carrying around signs that say, in essence, “God hates you” is giving glory to God.  I believe that showering love on others it what softens them and makes them want to share in what they see in us.  As simplistic as this may be, it seems to be supported by everything I know to be true of God.  I am reminded by my old buddy Grayson that I need to be very careful that the “banner” I take to the people I meet on the streets and elsewhere is one that says, “You have beauty inside you, you were saved by the Lamb, you are more than the sum of your sins, and Jesus has asked that I love you for Him.”

There’s an old saying that goes, “Love the sinner, hate the sin.”  Here’s my spin on that:  “Love the sinner and let God take care of their sin.”  We can’t go wrong if we take that approach.  And, to quote Forrest Gump, that’s all I have to say about that!