School starts again in just a few days, and I’ve been trying to fill my time with the stuff vacations are made of.  Tonight, that “stuff” came in the form of three juniors.

Collin wrote a few days ago and said he and a couple friends wanted to come over for dinner.  Of course, he’d done the same thing last week, sending me to the kitchen to bake up a storm, then hadn’t turned up, so I wasn’t sure he and his cohorts would actually turn up this time… 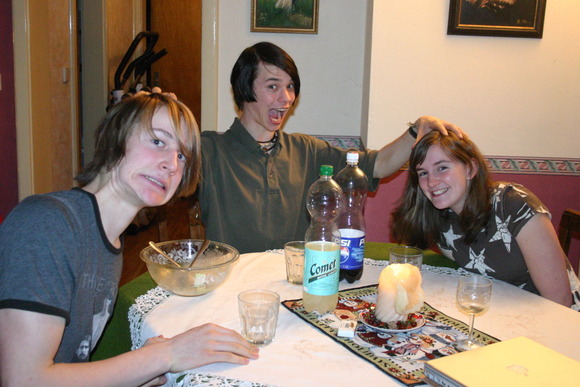 The conversations that followed were…how shall I say this?  Let’s say they were memorable.  Examples?

Collin (after someone commented that he was looking pained):  “I’m getting my teeth drilled by tiny midgets inside my mouth.”

Merritt (during the first 30 minutes of a movie none of us liked enough to finish):  “Does ‘ax murderer’ mean someone who murders people with an ax?”  We all gave him “duh” stares, so he explained himself:  “Well, a serial murderer doesn’t kill people with cereal!”  (He looked convinced of his argument, so we didn’t push it any further…)

Collin and Merritt (after saying the same thing at the same time):  “We rehearse.”  (And I swear to you that they really do!  They sit around and practice witty repartee to use next time they’re in public together…  Unique, those boys.)

Collin (trying to sound intelligent):  “That’s the arche-o-type of romance.”  (Uh…Collin, my friend, do you mean archetype?)

Collin:  (talking during Forrest Gump, a movie we did watch):  “I hate people who talk during movies.”  (“Hello, Pot?  This is Kettle calling…”)

And one of my favorites, accompanied by the following illustration:

Merritt (pointing to his elbow and bragging about his workout regimen):  “This muscle is rock-hard!” 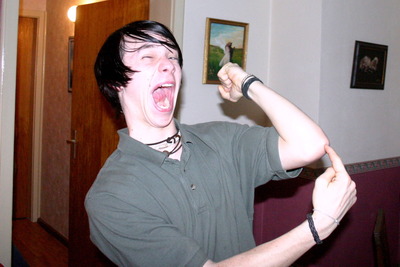 The boys took control of my camera and tried to outdo my multiple chin record. 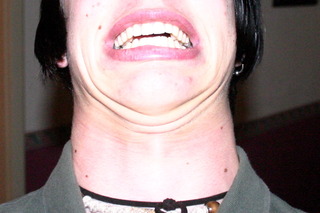 Then we posed for what is apparently a must-do at all teenager gatherings, the famed “Myspace shot”.  Note how none of my chins are visible on the picture below…no more need for liposuction or chin-lifts.  My new best friend is the little button in Photoshop that says “crop”! 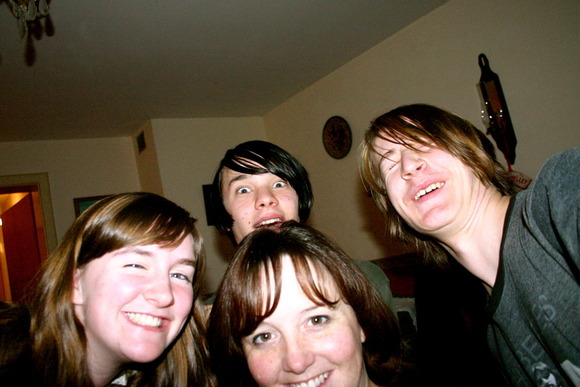 Finally, Collin, who desperately wants to be me when he grows up, tried to recreate one of my Christmas Eve memories.  What do you think?  Did he succeed? 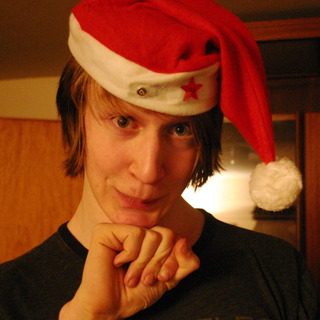 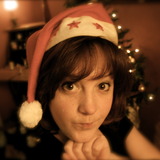 I must say that listening to these three talking leads to some pretty serious conversational whiplash.  A sample?

Meredith:  Can I get your husband-blanket?
Collin:  I watched ESOTSM over break.
Me:  Wow.  You said that without even having to think about it.
Merritt:  He’s been practicing.
Me:  You practice acronyms??
Collin:  A shark bit me on the arm, but I tore him off and killed him with my fist.
Meredith:  My jeans are still wet from the walk over here.
Merritt:  Do you think people can have sex if they don’t have brains?
Collin:  Faith is only 10% about facts…

I just glanced in the mirror and my eyes looked a little glazed over.  Go figure!

(Members of Creative Writing will understand what I really mean by “go figure”!)