I’ve spent a lot of time this week considering the many flavors of friendship I’m blessed to know.  And rather than write a long entry about the people I treasure, I thought I’d resort to pictures taken in the last three weeks alone.  Each one of these people is precious to me, though they’re as different as different can be!  From Renee’s profound levity to Mari Ellen’s giggly profundity to Chance’s insane sanity and Squirt, Xena and Spaz’s Star company…..  They’re all among God’s greatest gifts to me.  And I’m grateful beyond words. 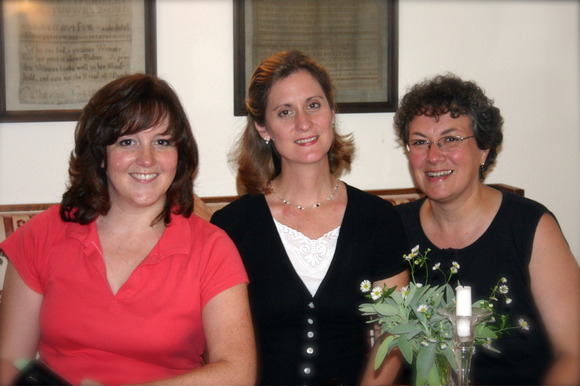 At the rose garden with Marie Ellen and Renee.  I particularly enjoyed watching the husbands of the ladies who were having tea in style that afternoon.  Though the women seemed to be absorbing the quaint British touches through their very pores, the scones and china teapots looked rather incongruous with the giant beer steins the men had ordered sitting next to them! I’m not sure what leverage the women used to drag their husbands to such a dainty place, but they looked anything but comfortable…!

And then there’s the owner of this luminous pair of eyes, a former student who is precious enough to me that I moved out of my apartment in order for him to be able to stay here for a few nights.  (Mind you, I got to have four short slumber parties with Mari Ellen as a payoff!)  Unfortunately, at the time I write, he’s off camping in the pouring rain because I needed to move back into my own place for a couple nights before taking off for Switzerland on Tuesday.  I’m feeling guilty….guilty, guilty, guilty, though I drove out into the rain in the wee hours and tried to find him..  (There’s a whole “nother” xanga entry there, but it’s still a bit too raw to just blurt it into cyberspace.  Suffice it to say that when the hearts of Good Samaritans get adulterated by a fear of the appearance of impropriety, the trite but Truthful WWJD gets compromised.  How sad that the potential nay-saying of some amputates the good-doing of others–and God gets impotented in the process.  How shameful that our testimonies can be amputated of their most basic form of compassion, their hands tied by the fear of censure from fellow Christians.  Again…that’s another entry I won’t launch into just yet, but you get the general drift of my thoughts.)  Just so you know, the young man pictured has taught me volumes about the meaning of loyalty, friendship and the beauty of a sincere soul.  Whoever said that beauty is ageless was clearly thinking of his spirit.  The greatest perk of this “job”?  The students–former and current.  I’m grateful. 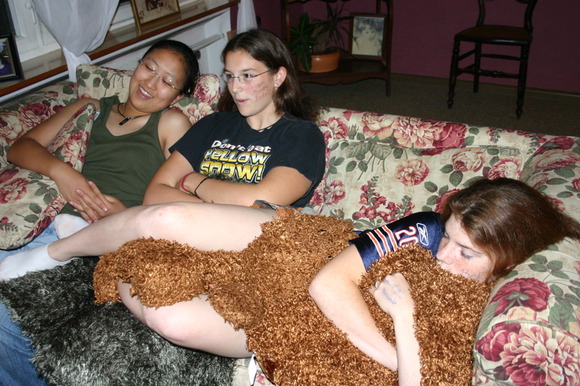 Star Academy, anyone?  Meet Squirt, Xena, and Spaz.  The channel comes in blurry and the singers sometimes sport three parallel faces, but by golly, we LOVE our Star Academy.  It’s just too bad I live so far away from France that the TV reception is so bad…  And Squirt, clearly, loves to cuddle up with dogs Muffin and Zidane!  You can come over and borrow them any time, Squirtalicious!

I love you, friends and students!!  Thank you for giving me you.