We experience few sacred moments in our lives.  Having spent the morning with Michelle Tebbe and her ever expanding belly, I’ve come to the conclusion that childbirth must be one such moment…  Have you ever caught yourself staring at an expectant mom’s stomach and trying to imagine the life inside–conscious, thumb-sucking, high-kicking life just waiting to be born?  Amazing.

I wasn’t there, 67 years ago today, when such a sacred moment occured in London, Ontario.  A baby boy was born, embarking in that moment of blood and pain on a journey of discovery, challenge, relationship and faith.  His life was never easy.  In his earlier years, his legs were so weak and bowed that he required heavy-duty leg braces connected to clunky therapeutic shoes to correct his handicap.  He was London’s less famous version of Forest Gump–and though he never jogged across a continent or shook hands with presidents or faught in a ferocious war, he did have a life of adventure, failure, accomplishment and emotion. 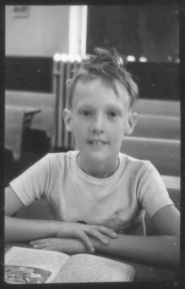 On his first day of first grade, his older sister brought him to school.  As the story goes, he wasn’t too fond of the prospect of classes and homework and bifocalled teachers.  So he found the biggest tree in the school’s courtyard, wrapped his little arms around it, and refused to let go.  His sister tried to pry his arms from around the anchor “saving” him from education, but he simply wouldn’t budge.  A wise adult eventually suggested that he’d probably let go if she just walked away.  So away she went–leaving the scrawny little boy clinging to the tree in the big, empty courtyard.  (Note the hair on the picture above–why did his mom ever let him out of the house looking like that on picture day??)

Time passed and the little boy grew up. He attended Moody Bible Institute and married a woman who shared his love of music and his desire for a music ministry in France.  And before long, they were headed overseas, where two children were born. 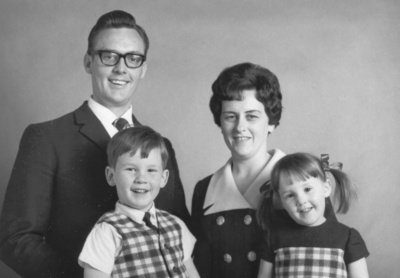 He was not always a happy man, riddled as he was with insecurities and disappointments–mostly in himself. But though he fought inner demons which caused deep, private pain, he was well loved by those who knew his public persona–his larger-than-life presence, his window-rattling laughter and his willingness to do anything for a friend.  He wasn’t always my friend.  He didn’t know how to love my frailty and didn’t understand the impact of his desperate need for validation on those who needed him most.  But he was my father–and I knew that he would fight to the death for me if such a situation arose.  He just had difficulty being my champion when no battles were required…

A lifetime ago today, my father was born.  I’m not sure what lives on of him in me.  Maybe a sense of humor.  An insatiable appetite for Big Macs…for Big Anything!  An eagerness to “rescue” others despite my own need for rescuing.  Straight hair I’ve committed my life to turning curly!  A fascination with all things mechanical.  A love-language few suspect.  A wussy chin.  A recurring, manic urge to go out and buy cars.  A love of sunsets–those daily Sacred Moments we so often fail to see. 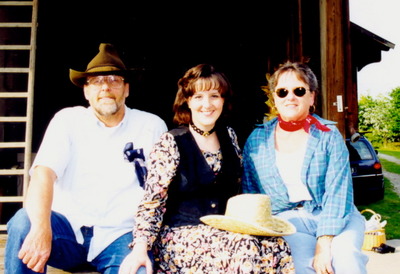 And on this anniversary of my father’s Sacred Moment, I can’t help but remember the final one I shared with him.  I’d always feared death–denied its inevitability and hoped I’d somehow escape its brush.  Until that day in January when I sat on my father’s bed, leaning across his legs, with one hand on his heart, telling him “It’s okay to let go” as I felt the erratic beats weaken under my hand, falter, then disappear. What a Sacred Moment that was–the most sacred of my lifetime–as I ushered my father out of this world’s illness and into Heaven’s exuberance.  By then, we had become friends–fast friends.  The kind of friends who would call multiple times a day just to relate trivial events, who would pretend we were rich and test-drive cars we could never afford, who would cry together at the National Anthem, who would find a massive snake in the back yard, catch it (stomachs churning and hearts racing), and drive it down to a local pond to set it loose.  His battle with leukemia was brief–and he shared his tears with me when no one else had seen them.

Sitting on his bed on the day he passed away, his heart under my palm, I marveled at the mystery and sacredness of death.   Along with my conversion, it was the most miraculous moment of my life, and though the grief washed over me in waves of disbelief, the love did too–sublimated somehow by the agony, beauty and simplicity of life stuttering, then halting…then dawning again beyond this universe.

Sixty-seven years ago today, my father was born. 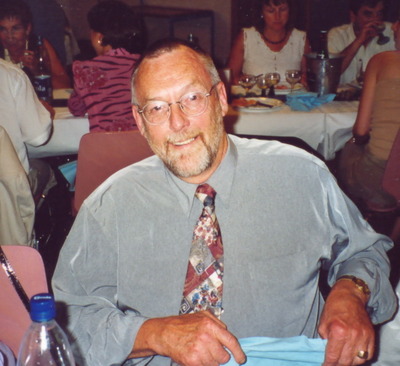