Simple Thought is a modern day scourge. It applies noncomplex, monolithic reasoning to issues too broad and complicated to be assessed so easily.
The topics to which we apply Simple Thought are numerous and thorny: NFL protests, theological disputes, political scandals, climate change debates, Affordable Care wranglings and #metoo malfeasance. All intense, multi-faceted issues. All addressed—from a bevy of sources—with sweeping conclusions that could fit on a Post-it note.

The lack of thoughtfulness and nuance is appalling. It does a disservice to important topics. God gave us minds capable of both profound and elevated thinking in pursuit of educated wisdom. The common pick-a-side-and-question-nothing approach discredits the authority of the person opinionating and dishonors the Creator. 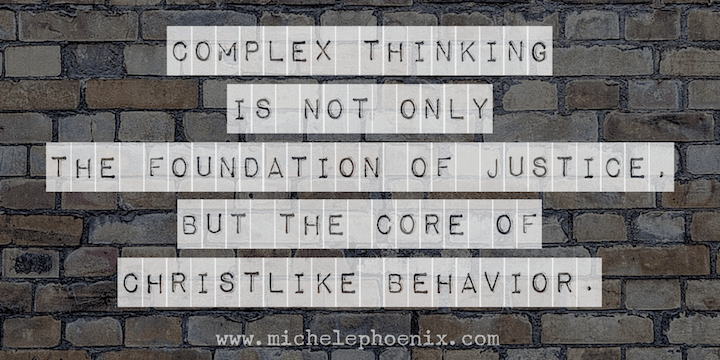 But I believe in Complex Thinking. It is the antithesis of knee-jerk reacting. It requires the kind of emotional and intellectual self-control that feels insensitive under such heartrending circumstances. Yet it is not only the foundation of justice, but the core of Christlike behavior, ultimately fostering wisdom and justice rather than emotion and retribution.
Imagine how our conversations around complicated issues would change if they were framed by the six major tenets of Complex Thinking.

THE SIX TENETS OF COMPLEX THINKING

1. Restraint:
It’s so hard to hold off. We want to deplore, condemn and exhort while our outrage is still raw and almost uncontainable. It would feel so.very.good to let word-arrows fly at the target of our indignation. Complex Thinking, with its commitment to truth and caution, requires time. Our gut-level impulse to accuse and indict—though it may be fueled by a righteous repudiation of injustice—must yield to a more measured process.

2. Effort:
Reacting is easy and instinctive. But gathering information? It feels tiresome and taxing. Yet Complex Thought demands that we not just consume the reporting saturating our airwaves, but that we deepen the scope of our own exploration, even looking into conflicting allegations for genuine evidence. I don’t always want to relinquish the time and energy information-gathering requires, but in order to know more, I must be willing to search more. To seek to discern between fact and speculation. To apply truth-based reason to overwhelming emotion.

3. Courage:
I’ll admit that it’s often hard to truly consider the perspective of those whose conclusions differ from mine. Yet if I really want my judgment to be based on truth and intellectually sound, I must find the courage to wade into uncomfortable, even offensive thought-environments. I must seek to understand why others believe differently than I do—what has shaped their understanding of humanity, morality and justice. Even at the risk of having to admit to the wrongness of my presumptions, I must honestly consider the basis of their beliefs. 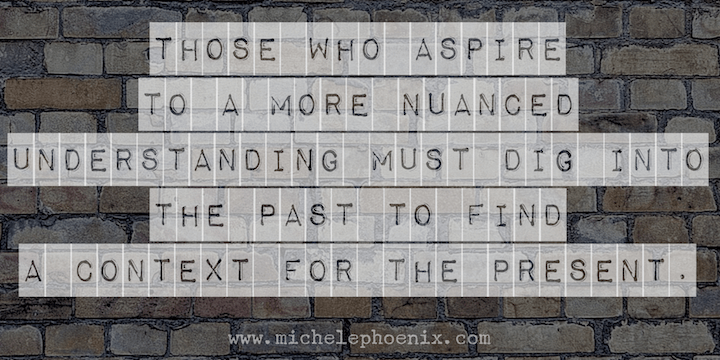 4. Retrospection:
More often than not, there is a historical background to current conflicts, be they social, economical or political. Whether on a national scale or in academic institutions, it’s safe to say that a perspective that goes back decades or centuries will lend explanatory context to contemporary ills. It may not excuse them, but it can illuminate their origin. Perusing media coverage may not be enough to understand the genesis of long-fermenting tensions. Even the most militant of individuals may not understand the historic events and policies that created the injustices that propel them into the streets with signs and chants. It’s up to those who aspire to a more nuanced understanding to dig into the past to find a context for the present.

5. Tension:
Complex matters will seldom reach simplistic conclusions. Inquiries based on incomplete information will never achieve categorical results. The Complex Thinker must be willing to relinquish absolutes and live in the tension of a complicated reality. It’s not trading black and white certainty for the ambivalence of shifting gray. It’s rejecting a penchant for monolithic rightness and reaching instead for multi-faceted truth. It’s acknowledging that we live in a world where few people, institutions and events can be deemed all good or all bad.
Complex Thinking means that I can conceive of professed believers employing unchristian methods and still being individuals of authentic faith. It means that I can admit that a political party that has demonstrated dangerous flaws might also get it right on some specific issues. It means that a handful of police officers can be inexcusably corrupt while a majority of others aren’t. It means that a press corps that aspires to be unbiased can sometimes lean too far from neutral in its pursuit of justice. It means that good, intelligent people can be drawn into premature, irrational responses by the force of their outrage—and that others, even faced with incriminating facts, might be unable to indict leaders and institutions that have earned their respect and loyalty. 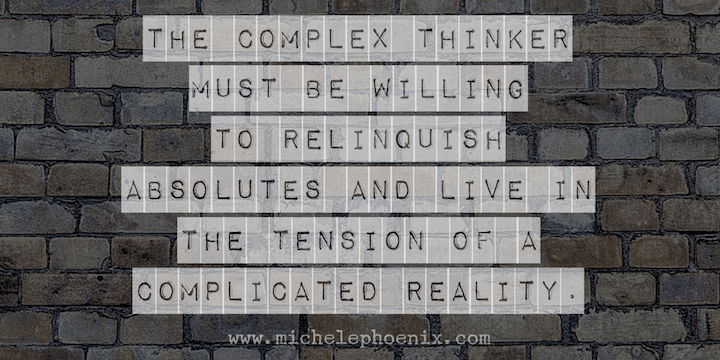 6. Thoughtfulness:
What we do and say, as debates rage around us, must exhibit the very values that led us to engage in Complex Thinking in the first place: reason and truthfulness. When we use vitriolic overstatements, threats and slander to express our hard-won convictions, we squander any intellectual legitimacy we may have.
Granted, a thoughtful response based on Complex Thinking likely won’t earn us the kind of exposure more acerbic voices garner—rhetorical warfare is so much more exciting than measured communication. But the careful articulation of a well-researched opinion has the power to change the conversation one interaction at a time, and those of us who aspire to wiser speaking must be content with that.